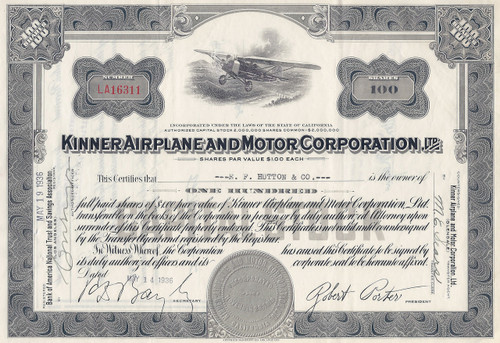 Highly desirable piece for the scripophily aviation collectors.  Tremendous vignette of one of the company's aircraft. Issued and not cancelled, 100 shares, issued to E.F. Hutton & Co.  Crisp and clean with very light folds, Dated 1936.

Kinner Airplane & Motor Corp. was founded in 1919 by W.B. Kinner to produce radial engines and light aircraft. The company was founded in Glendale, California. Kinner's chief engineer was Max B. Harlow who went on to found the Harlow Aircraft Company.