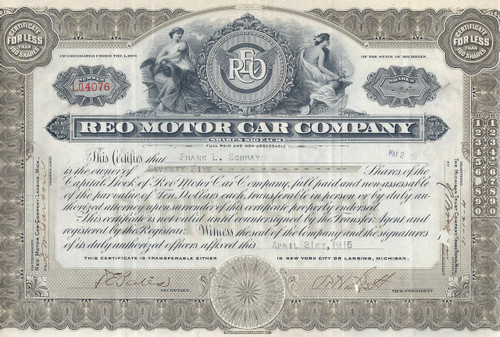 Stunning antique stock certificate with a beautiful top vignette of two female figures seated beside the elaborate REO winged logo. This is the center piece for automotive stock certificate collections. Some dark staining in the left edge (not shown in scan) but does not intrude into printed border. The cert colors have different date ranges: orange are dated 1936, Brown 1924-1925, Olive 1916-1924.

The REO Motor Car Company was a Lansing, Michigan based company that produced automobiles and trucks from 1905 to 1975. At one point the company also manufactured buses on its truck platforms.

REO was founded by Ransom E. Olds during August 1904. Olds had 52 percent of the stock and the titles of president and general manager. To ensure a reliable supply of parts, he organized a number of subsidiary firms like the National Coil Company, the Michigan Screw Company, and the Atlas Drop Forge Company.

Originally the company was to be called "R. E. Olds Motor Car Company," but the owner of Olds' previous company, then called Olds Motor Works, objected and threatened legal action on the grounds of likely confusion of names by consumers.  Olds then changed the name to his initials. Olds Motor Works soon adopted the popular name of its vehicles, Oldsmobile (which, along with Buick and Cadillac, became founding divisions of General Motors Corporation).

By 1907, REO had gross sales of $4.5 million and the company was one of the four wealthiest automobile manufacturers in the U.S. After 1908 however, despite the introduction of improved cars designed by Olds, REO's share of the automobile market decreased due in part to competition from emerging companies like Ford and General Motors.

REO added a truck manufacturing division and a Canadian plant in St. Catharines, Ontario in 1910. In 1915, Olds relinquished the title of general manager to his protégé Richard H. Scott and eight years later he ended his tenure as the company's presidency as well, retaining the position of chairman of the board.

From 1915 to 1925, under Scott's direction REO remained profitable. In 1923, the company sold an early recreational vehicle, called the "Motor Pullman Car." Designed by Battle Creek, Michigan newspaper editor, J.H. Brown, the automobile included a drop-down sleeping extension, a built-in gas range and a refrigerator.  During 1925, however, Scott, like many of his contemporaries/competitors, began an ambitious expansion program designed to make the company more competitive with other automobile manufacturers by offering cars in different price ranges. The failure of this program and the effects of the Depression caused such losses that Olds ended his retirement during 1933 and assumed control of REO again, but resigned in 1934. During 1936, REO abandoned the manufacture of automobiles to concentrate on trucks.

Although truck orders during World War II enabled it to revive somewhat, the company remained unstable in the postwar era, resulting in a bankruptcy reorganization. In 1954, the company was still underperforming, and sold vehicle manufacturing operations to the Bohn Aluminum and Brass Corporation of Detroit. Three years later, in 1957, it became a subsidiary of the White Motor Company. White then merged REO with Diamond T Trucks in 1967 to form Diamond-Reo Trucks, Inc. In 1975, this company filed for bankruptcy in the Western District of Michigan and most of its assets were liquidated. Volvo later took over White and thus currently owns the rights to the REO brand name.