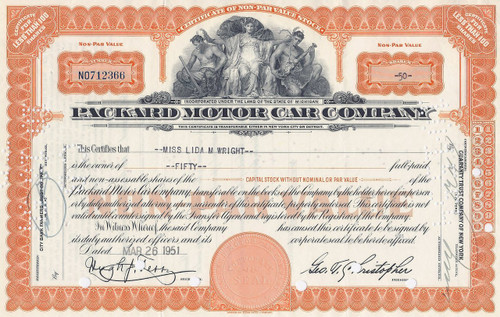 Packard was an American luxury automobile marque built by the Packard Motor Car Company of Detroit, Michigan, and later by the Studebaker-Packard Corporation of South Bend, Indiana. The first Packard automobiles were produced in 1899, and the last in 1958.

Packard was founded by James Ward Packard, his brother William Doud Packard, and their partner, George Lewis Weiss, in the city of Warren, Ohio, where 400 Packard automobiles were built at their Packard factory on Dana Street Northeast, from 1899 to 1903. Being a mechanical engineer, James Ward Packard believed they could build a better horseless carriage than the Winton cars owned by Weiss, an important Winton stockholder. In September, 1900, the Ohio Automobile Company was founded to produce "Packard" autos. Since these automobiles quickly gained an excellent reputation, the name was changed on October 13, 1902, to the Packard Motor Car Company.

Henry Bourne Joy, a member of one of Detroit's oldest and wealthiest families, bought a Packard. Impressed by its reliability, he visited the Packards and soon enlisted a group of investors—including Truman Handy Newberry and Russell A. Alger Jr. On October 2, 1902, this group refinanced and renamed the New York and Ohio Automobile Company as "Packard Motor Car Company", with James as president. Alger later served as vice president. Packard moved its automobile operation to Detroit soon after, and Joy became general manager, later to be chairman of the board.

From this beginning, through and beyond the 1930s, Packard-built vehicles were perceived as highly competitive among high-priced luxury American automobiles. The company was commonly referred to as being one of the "Three P's" of American motordom royalty, along with Pierce-Arrow of Buffalo, New York and Peerless of Cleveland, Ohio.

In 1942, the Packard Motor Car Company converted to 100% war production.[30] During World War II, Packard again built airplane engines, licensing the Merlin engine from Rolls-Royce as the V-1650, which powered the famous P-51 Mustang fighter, ironically known as the "Cadillac of the Skies" by GIs in WWII. Packard also built 1350-, 1400-, and 1500-hp V-12 marine engines for American PT boats and some of Britain's patrol boats.

By the end of World War II, Packard was in excellent financial condition, but several management mistakes became ever more visible as time went on. Like other U.S. auto companies, Packard resumed civilian car production in late 1945, labeling them as 1946 models by modestly updating their 1942 models. Although the postwar Packards sold well, the ability to distinguish expensive models from lower-priced models disappeared as all Packards became virtually alike in styling. Further, amid a booming seller's market, management had decided to direct the company more to volume middle-class models, thus concentrating on selling lower-priced cars instead of more expensive — and more profitable — models. Worse, they also tried to enter the taxi cab and fleet car market. The idea was to gain volume for the years ahead, but that target was missed: Packard simply was not big enough to offer a real challenge to the Big Three, and they lacked the deep pockets with which a parent company could shelter them, as well as the model lineup through which to spread the pricing.