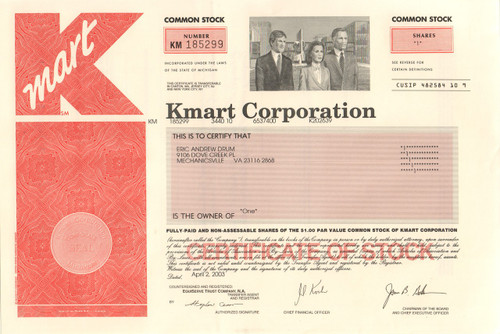 Nice pre-Sears Kmart stock from the time of their bankruptcy (before name change to Kmart holding Corp).  Great stylized Kmart logo in the left border.  Top vignette has three modern figures in front of a city scene.  Isued and not cancelled. Dated 2003.

Kmart (K-Mart) is an American chain of discount department stores headquartered in Hoffman Estates, Illinois, United States. The chain purchased Sears for $11 billion in 2005, forming a new corporation under the name Sears Holdings Corporation. The company was founded in 1962 and is the third largest discount store chain in the world, behind Walmart and Target, with stores in the United States, Puerto Rico, the U.S. Virgin Islands, and Guam. It also previously operated stores in Canada, Mexico, and Eastern Europe. As of 2014, the company operated a total of 1,077 Kmart stores.

Kmart became known for its "Blue Light Specials." They occurred at surprise moments when a store worker would light up a mobile police light and offer a discount in a specific department of the store. At the height of Kmart's popularity, the phrase "attention Kmart shoppers" also entered into the American pop psyche.

Kmart's world headquarters was located in Troy, Michigan in Greater Detroit, but since the purchase of Sears, it has been relocated to Hoffman Estates in Greater Chicago, Illinois. Kmart also exists in Australia and New Zealand, although it now has no relation to the American stores except in name, after U.S. equity in the Australian business was purchased in the late 1970s.

Sebastian S. Kresge, the founder of the company that would become Kmart, met variety store pioneer Frank Woolworth while working as a traveling salesman and selling to all nineteen of Woolworth's stores at the time. In 1897 Kresge invested $8,000 saved from his job in joint ownership with his friend John McCrory of a five and dime store in Memphis, to which they added another in downtown Detroit the following year; these were the first S.S. Kresge stores. After two years of partnership, he paid McCrory $3,000 and gave up his share in the Memphis store for full ownership of the Detroit store, and formed the Kresge & Wilson Company with his brother-in-law, Charles J. Wilson.

In 1912, Kresge incorporated the S.S. Kresge Corporation with eighty-five stores. The company was first listed on the New York Stock Exchange on May 23, 1918. During World War I, Kresge experimented with raising the limit on prices in his stores to $1. By 1924, Kresge was worth approximately $375,000,000 (equivalent to $5.16 billion in 2015) and owned real estate of the approximate value of $100,000,000. Early century growth remained brisk, with 257 stores in 1924 growing to 597 stores operating in 1929. Kresge retired as president in 1925. The Great Depression reduced profitability and resulted in store closings, with the number reduced to 682 in 1940. Post-war retailing saw many changes in shopping patterns with many customers moving out of the cities into the suburbs. The Kresge company followed them and closed and merged many urban stores so that by 1954 the total number of stores in the US had declined to 616.

Under the leadership of executive Harry Cunningham, S.S. Kresge Corp. opened the first Kmart store on March 1, 1962, in Garden City, Michigan, just four months before the first Walmart opened. This store is still in operation to this day. A total of eighteen Kmart stores opened that year. Kmart Foods, a now defunct chain of Kmart supermarkets, opened in that same decade. Company founder Kresge died on October 18, 1966.

Until November 1990, when it was passed by Walmart, Kmart was the second largest retailer in the US, after Sears. During the 1980s, the company's fortunes began to change; many of Kmart's stores were considered to be outdated and in decaying condition. In the late 1980s and into the 1990s, the corporate office shifted much of its focus from the Kmart stores to other companies it had acquired or created, such as The Sports Authority, Builders Square, and Waldenbooks.

The original Blue Light Special, first introduced in 1965, was retired in 1991. The company brought back the Blue Light Special in 2001, but again discontinued it in 2002. The concept was briefly revived in 2005, though Kmart at that time had no plans to use the concept long-term. Blue Light Specials were revived again in 2009 on Saturdays, offering surprise hour-long sales on selected merchandise.

In 1990, in an effort to update its image, Kmart introduced a new logo. It dropped the old-style italic "K" with a turquoise "mart" in favor of a red block letter K with the word "mart" written in script and contained inside the K. Kmart then began remodeling stores shortly thereafter, but most were not remodeled until the mid-1990s, and some have not been completely renovated to this day. This logo was replaced in 2004 with the current logo.

On January 22, 2002, Kmart filed for Chapter 11 bankruptcy protection under the leadership of its then-chairman Chuck Conaway and president Mark Schwartz.  Conaway, who had had success building up the CVS Corporation, had accepted an offer to take the helm at Kmart along with a loan of some $5 million. In a scandal similar to that involving Enron, Conaway and Schwartz were accused of misleading shareholders and other company officials about the company's financial crisis while making millions and allegedly spending the company's money on airplanes, houses, boats and other luxuries.  As Kmart emerged from bankruptcy, Conaway was forced to step down and was asked to pay back all the loans he had taken. On May 6, 2003 Kmart emerged from bankruptcy protection as Kmart Holdings Corporation. On June 10, 2003, it began trading on the NASDAQ with the ticker symbol KMRT. On November 17, 2004, Kmart announced its intention to purchase Sears. As a part of the merger, the Kmart Holdings Corporation would change its name to Sears Holdings Corporation. The new corporation announced that it would continue to operate stores under both the Sears and Kmart brands