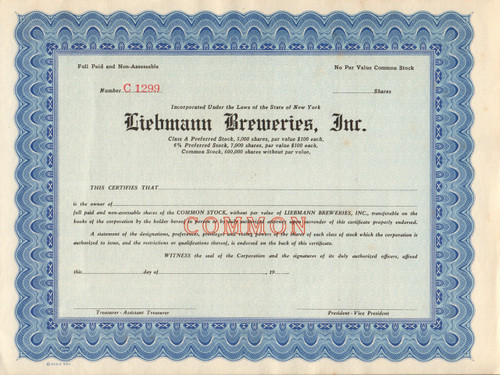 Plain certificate from a very prominent brewing family that product the classic Rheingold beer.  unissued but circa 1933 from company records.

In 1850, Samuel Liebmann emigrated to the U.S. The family settled in Brooklyn and Samuel, together with his three sons, Joseph, Henry, and Charles, opened a brewery once again at the corner of Forest and Bremen Streets.  In the early years, the brewery had produced 1000 barrels per year, by 1914 its output stood at 700,000 barrels.

Unfortunately, political developments in the U.S. between 1914 and 1933 were extremely disadvantageous for the Liebmann brewery. The resentment against Germany and anything German during World War I led to an informal boycott of German beers. Following close upon the lean wartime years, was the implementation of Prohibition in 1920 forbidding the manufacturing and trading of alcohol. The Liebmann enterprise managed to survive by producing lemonade and a product they called "Near Beer."

With the reinstatement of legal alcohol production under President Roosevelt in 1933, opportunities for the brewery opened up, abetted by the anti-Semitic policies of Hitler's Germany. The pressures on Jewish businessmen there, brought Dr. Hermann Schülein, general manager of the world-renowned LšwenbrŠu brewery, to America. Schulein's father, Joseph, had acquired two of Munich's leading breweries at the end of the nineteenth century--Union and Münchner Kindl--and his son had managed the 1920 merger with Löwenbrau. Arriving in New York with this experience behind him, Hermann Schülein became one of the top managers of the Liebmann brewery and was instrumental in its spectacular growth after World War II.

Working with Philip Liebmann (great-grandson of Samuel), Schülein developed a dry lager beer with a European character to be marketed under the brand name "Rheingold." According to company legend, the name was created in 1883 at a brewery dinner following a performance at the Metropolitan Opera. When the conductor took up his glass, he was so taken with the shade of the beer, that he declared it to be the color of "Rheingold." For New Yorkers, however, the name Rheingold did not bring to mind the Nibelungen fables, but the pretty young ladies who participated in Schülein's most brilliant marketing strategy – the selection of each year's Miss Rheingold by the beer-drinking public of greater New York.

For thirty years, Rheingold Beer reigned supreme in the New York area, but by 1976, as a local brewery, it could no longer compete with nationwide companies such as Anheuser & Busch, Miller, and Schlitz, and its doors were closed. Only recently, using the same brewmaster, Rheingold is once again being sold in the tri-state area.