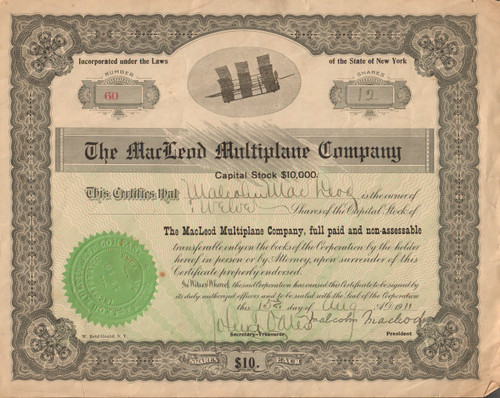 This is the only known signed certificate by the founder. First time on the market and not listed in any reference. Found in saved company archives with similar letterhead and flight pictures. Remarkable vignette of 18-winged aircraft in flight. Issued and not cancelled but dated 15 August 1911. Also signed by John Oates as secretary-treasurer who was also the company promoter.

From company literature: Malcolm MacLeod ran away from home in 1875 at age 15 to become a cabin boy on a South American ship where seeing an Albatross in flight ignited in him the idea and passion which would lead to his entering his MacLeod Multiplane Company’s plane as one of only eleven entries in the Gould Scientific American Flying Machine Prize Contest in 1912 and in 1916 his contacting Glenn Curtiss to join him in a patent case against Albert Janin who had just defeated Curtiss’s patent claim on the hydroplane.

This piece cannot be found anywhere but here!