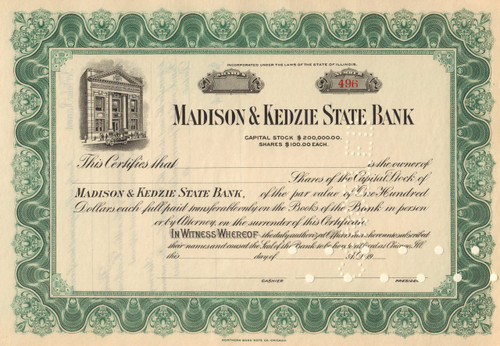 Neat bank piece with a great engraved vignette of the company building with 1920's cars.  Unissued and punch cancelled.  Circa 1920 from issued examples. Printed 19__ on the certificate.

Incorporated in 1919, the bank was located at the corner Madison & Kedzie streets in Chicago. It opened for operations in 1921. The building was three stories, made of Bedford stone and steel. It contained one of the largest safety deposit vaults in Chicago with room for 22,000 boxes.  The bank was the first of its type to use large display windows like retail operations.  The building was next door to the Senate Theater located in the near geographic center of the city, known as the "Hub of Chicago".  It was the center of a district combining large industries, great retail, and desirable residences.

The bank failed under the pressures of the Depression in 1933. The stately building pictured on this certificate now houses a liquor store.