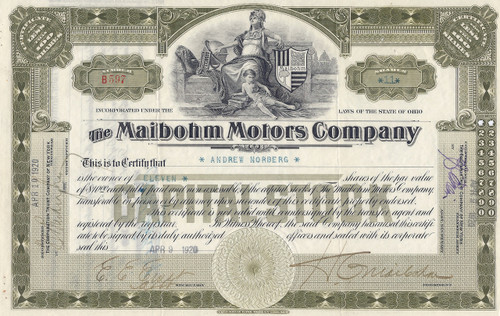 Hand signed by the company president (H.C. Maibohm). Beautiful vignette of Greek female with symbols of industry and the company logo shield. Issued and uncancelled 1920.  Small part of the white border is missing at the lower left (not seen in scan) but does not impact the printing and would mat out when framed.

From 1917 to 1919 The Maibohm Motors Co. produced about 6,000 American Automobiles that sold for $300.00 to $500.00. The first Maibohm automobiles were a model A two passenger speedster and two passenger coupe followed by a Model B five passenger touring car and five passenger enclosed car. All four automobiles used a four cylinder engine up to 1918. After that date a larger and more powerful Falls Six cylinder engine was used. This line of Maibohm Automobiles continued to be produced in Racine, WI up to 1919 when a fire completely destroyed the Maibohm Motors Co. factory. The fire occurred on January 1, 1919.

Due to the economic down turn in the 1920s The Maibohm Motors Co. was sold to the Arrow Motors Co. in 1922. Shortly there after the Maibohm factory was used to produce the Courier by The Courier Motor Co. of Sandusky, Ohio.