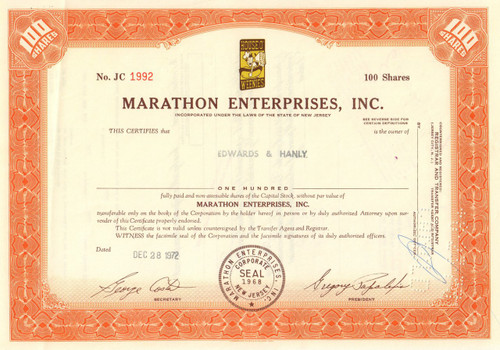 Fun novelty piece with a entertaining vignette of the "House O' Weenies" logo.  Issued and cancelled, Dated in the 1970's.

The company's flagship product is the Sabrett brand frankfurters. The frankfurter and other meats are processed at the Marathon factory in the Bronx, New York. The frankfurters are sold through Sabrett branded carts on the streets of New York City and elsewhere, and local supermarkets and club locations such as BJ's, Costco, and Jetro. Other processed meats from Marathon include pastrami and salami.

Gregory Papalexis, of Greek descent, was the owner and president of the company. After he graduated from New York University in 1948, Gregory, along with his partner wanted to name the company differently: one wanted to call it "Sabre Meat Company", only to find out that it was already used in New York City. They eventually agreed to name it Sabre-ette and then later shortened it to Sabrett. Though Gregory initially started to sell hot dog buns, he eventually decided to produce the hot dogs and the famous stainless steel push cart branded the House O' Weenies with now well-known blue and yellow umbrellas.

Other products sold under the Sabrett brand name include condiments popular on hot dogs such as sauerkraut, sweet relish, spicy brown mustard, and onions in a sauce.