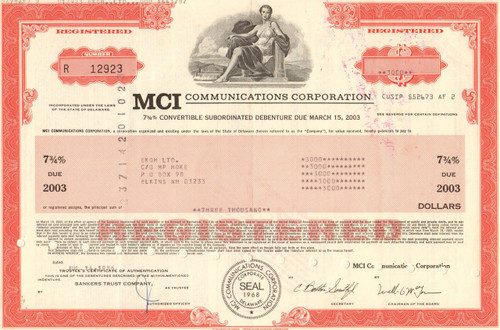 Great vignette of allegorical seated female seated on a throne in front of mountain and an overflowng dam.  Issued for $1000 (typed value), dated 1986.  Great telecom collectible.

MCI Communications Corp. was an American telecommunications company that was instrumental in legal and regulatory changes that led to the breakup of the AT&T monopoly of American telephony and ushered in the competitive long-distance telephone industry. It was headquartered in Washington, D.C.

Founded in 1963, it grew to be the second-largest long-distance provider in the U.S. It was purchased by WorldCom in 1998 and became MCI WorldCom, with the name afterwards being shortened to WorldCom in 2000. WorldCom's financial scandals and bankruptcy led that company to change its name in 2003 to MCI Inc.. The MCI name disappeared in January 2006 after the company was bought by Verizon. As of May 2011, the MCI trademark is still maintained on MCI.com and on a sub-page of Verizon.com, while the name of one of its former long distance plans, Friends & Family, is maintained as a Verizon Wireless service offering.

MCI was founded as Microwave Communications, Inc. on October 3, 1963 with John D. Goeken being named the company's first president. The initial business plan was for the company to build a series of microwave relay stations between Chicago, Illinois and St. Louis, Missouri. The relay stations would then be used to interface with limited-range two-way radios used by truckers along U.S. Route 66 or by barges on the Illinois Waterway. The long-distance communication service would then be marketed to shipping companies that were too small to build their own private relay systems. In addition to the radio relay services, MCI soon made plans to offer voice, computer information, and data communication services for business customers unable to afford AT&T's TELPAK service.

The fledgling business began a process of raising capital and submitting applications to the Federal Communications Commission (FCC) for appropriate licenses. Hearings on Microwave Communications' initial application between February 13, 1967 and April 19, 1967 resulted in a recommendation that the FCC approve MCI's application.

Another FCC ruling that would affect the company was the June 26, 1968 ruling in the Carterfone case that deemed AT&T's rules prohibiting private two-way radio connections to a telephone network were illegal.[4] AT&T quickly sought a reversal of the ruling, and when the FCC denied their request brought suit against the FCC in the U.S. Court of Appeals.[5] The FCC's decision was upheld, thus creating a new industry: privately (non-Bell) manufactured devices could be connected to the telephone network as long as the manufacturer met interface standards.

In 1968, William G. McGowan, an investor from New York with experience in raising venture capital, met with the board of Microwave Communications to discuss financing plans for the business. As a result of meetings in June and July, Microwave Communications of America, Inc (MICOM) was incorporated on August 8, 1968 as an umbrella corporation to help build a nationwide microwave relay system. McGowan also made an investment into the new corporation large enough to pay all outstanding debts of the combined businesses and create a cash reserve. The investment also provided McGowan a stake in the company and a seat on the board.

In 1983, in conjunction with Michael Milken and Drexel Burnham Lambert, the company issued a $1.1 billion hybrid security—at the time the largest debt financing in history. The financing allowed company management to state an extra $500 million in cash on their balance sheet so that customers, suppliers, and investors would know they were financially strong. The immediate effect was that management no longer was forced to spend so much time raising capital. By 1990, MCI had become the nation’s second-largest telecommunications company, establishing a fiber-optic network spanning more than 46,000 miles. The company offered more than 50 services in more than 150 countries that included voice, data, and telex transmissions, MCI Mail and MCI Fax.

In 1991, British Telecommunications PLC purchased 20% of the company and later made an offer to purchase the rest in 1996. At the same time, GTE, now a part of Verizon, made a bid to purchase MCI for an all-cash purchase. While these offers were being considered by the MCI board, WorldCom, Inc. announced it was also interested in purchasing MCI and made a higher offer than either the BT or GTE offers. On November 10, 1997 in a stock-swap deal valued at $34.7 billion, MCI accepted the buyout from WorldCom. On September 15, 1998 the new company, MCI WorldCom, opened for business.