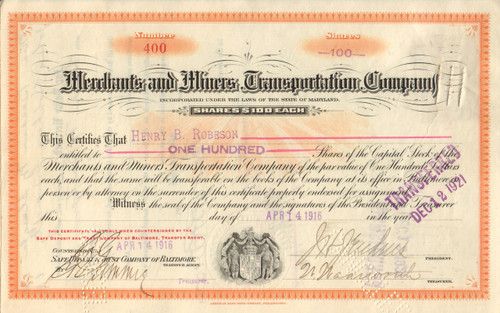 Awesome maritime history on this piece.  Nice vignette of the Maryland state seal at the bottom. Issued and cancelled. Dated 1916

Founded in Baltimore in 1852 to operate a cargo and passenger steamship line between Baltimore and Boston, Mass. The service initially operated with two wooden hulled side wheelers, but in 1859 built two iron hulled steamers to augment services and extended services to call at Providence, Rhode Island. Services were disrupted by the American Civil War, but resumed in 1864.

After a period of decline after the war, the company slowly recovered and by 1869 were able to order a new ship. Further ships were built in the 1870s and in 1876 the Baltimore & Savannah SS Co. was purchased which allowed the company to enter the cotton trade between Savannah, Charleston and New York. The company expanded in the 1880s and added several new ports of call including Newport News and Norfolk to their routes. In 1900 a Philadelphia - Savannah service was started and in 1907 the Winsor Line of Philadelphia was purchased with their fleet of seven steamers.

A new route between Baltimore and Jacksonville commenced in 1909 and in 1920 a service was initiated to Havana, Cuba, but this was discontinued after about a year. A service to Nassau, Bahamas started in 1939, but on the entry of the United Stated into World War II in 1941, most of the company's ships were requisitioned for war duty. Limited services continued, but after the war, it was not considered financially viable to re-purchase ships which had been sold to the Government or to build new ships and in 1948 it was decided to cease trading. The company was officially liquidated in 1952.