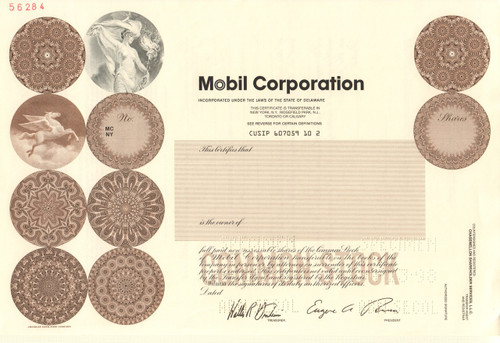 Mobil, previously known as the Socony-Vacuum Oil Company, is a major Anglo-American oil company which merged with Exxon in 1999 to form a parent company called ExxonMobil. Today Mobil continues as a major brand name within the combined company, as well as still being a gas station sometimes paired with their own store or On the Run. The former Mobil headquarters in Fairfax County, Virginia, were used as ExxonMobil's downstream headquarters until 2015 when ExxonMobil consolidated employees into a new corporate campus in Spring, Texas.

Following the break-up of Standard Oil in 1911, the Standard Oil Company of New York, or Socony, was founded, along with 33 other successor companies. In 1920, the company registered the name "Mobiloil" as a trademark. Henry Clay Folger was head of the company until 1923, when he was succeeded by Herbert L. Pratt. Beginning February 29, 1928 on NBC, Socony Oil reached radio listeners with a comedy program, Soconyland Sketches, scripted by William Ford Manley and featuring Arthur Allen and Parker Fennelly as rural New Englanders. Socony continued to sponsor the show when it moved to CBS in 1934. In 1935, it became the Socony Sketchbook, with Christopher Morley and the Johnny Green orchestra. In 1931, Socony merged with Vacuum Oil to form Socony-Vacuum.

In 1933, Socony-Vacuum and Jersey Standard merged their interests in the Far East into a 50–50 joint venture. Standard-Vacuum Oil Co., or "Stanvac," operated in 50 countries, including New Zealand, China, and the region of East Africa, before it was dissolved in 1962. In 1935, Socony Vacuum Oil opened the huge Mammoth Oil Port on Staten Island which had a capacity of handling a quarter of a billion gallons of petroleum products a year and could transship oil from ocean-going tankers and river barges.

In 1955, Socony-Vacuum was renamed Socony Mobil Oil Company. In 1963, it changed its trade name from "Mobilgas" to simply "Mobil", introducing a new. To celebrate its 100th anniversary in 1966, "Socony" was dropped from the corporate name.

During US involvement in World War II, April 29, 1942, Socony's unescorted tanker, named Mobiloil, was sunk by a German U-boat, and all 52 people survived after 86 hours adrift in lifeboats. Socony-Mobil ranked 86th among United States corporations in the value of World War II military production contracts.

Through the years, Mobil was among the largest sellers of gasoline and motor oils in the United States and even held the top spot during the 1940s and much of the 1950s. Various Mobil products during the Socony-Vacuum and Socony-Mobil years included Metro, Mobilgas and Mobilgas Special gasolines; Mobilfuel Diesel, MobilHeat and Mobil-flame heating oil, Mobil Kerosine, Lubrite,[6] Gargoyle, Mobiloil and Mobiloil Special motor oils; Mobilgrease, Mobillubrication, Mobil Upperlube, Mobil Freezone and Permazone antifreezes, Mobilfluid automatic transmission fluid, Mobil Premiere tires, Mobil Stop-Leak, and Mobil Lustrecloth, among many others.

In 1954, Mobil introduced a new and improved Mobilgas Special in response to trends toward new automobiles powered by high-compression engines that demanded higher and higher octane gasolines. The newest formulas of Mobilgas Special were advertised as offering "A Tune-Up in Every Tankful" due to a combination of chemicals known as the "Mobil Power Compound" which was designed to increase power, check pre-ignition ping, correct spark plug misfiring, control stalling and combat gumming up of carburetors.

As automakers were switching en masse from carbureted to fuel-injected engines during the early to mid-1980s, and the detergent additives that existed in most available gasolines proved not to be enough to prevent injection clogging, leading to drivability problems, Mobil received accolades from General Motors and other automakers for increasing the detergency of its Super Unleaded gasoline in 1984 to prevent formation or deposit build-ups of the injectors but also remove existing deposits as well in normal driving. At the end of the 1980s Mobil sold its fuel stations in Norway, Sweden, and Denmark to Norsk Hydro, who converted them into Hydro stations.

Mobil moved its headquarters from New York to Fairfax County, Virginia, in 1987. In 1998, Mobil and Exxon agreed on a merger to create ExxonMobil, which was completed on November 30, 1999. Lou Noto was Chairman of Mobil at the time of the merger, and Walter Arnheim was treasurer.