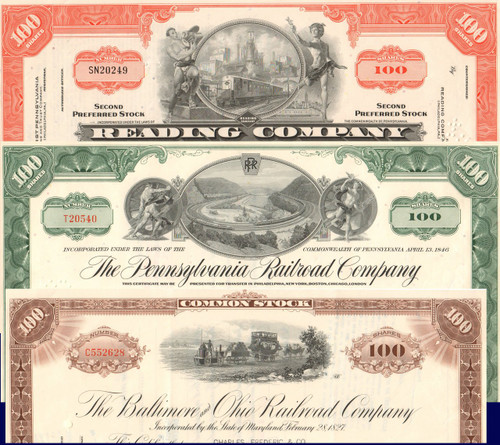 Great collector set.  Fun gift idea for the Monopoly game fan or railroad enthusiast.  Real stock certificates from the railroads of the Monopoly board game.
Colors of certificates will vary from sample picture due to availability.

Note:
There was no real Short Line RR. The inventor of the game changed the Short Line Bus Company to a railroad name on the game board for symmetry!

The history of the board game Monopoly can be traced back to the early 20th century. The earliest known version of Monopoly, known as The Landlord's Game, was designed by an American, Elizabeth Magie, and first patented in 1904 but existed as early as 1902. A series of board games were developed from 1906 through the 1930s that involved the buying and selling of land and the development of that land. By 1933, a board game had been created much like the version of Monopoly sold by Parker Brothers and its related companies through the rest of the 20th century, and into the 21st. Several people, mostly in the Midwestern United States and near the East Coast, contributed to the game's design and evolution.

By the 1970s, the idea that the game had been created solely by Charles Darrow had become popular folklore; it was printed in the game's instructions for many years, in a 1974 book devoted to Monopoly, and was cited in a general book about toys even as recently as 2007. Even a guide to family games published for Reader's Digest in 2003 only gave credit to Darrow and Elizabeth Magie, erroneously stating that Magie's original game was created in the 1800s, and not acknowledging any of the game's development between Magie's creation of the game, and the eventual publication by Parker Brothers.

Also in the 1970s, Professor Ralph Anspach, who had himself published a board game intended to illustrate the principles of both monopolies and trust busting, fought Parker Brothers and its then parent company, General Mills, over the copyright and trademarks of the Monopoly board game. Because of the lengthy court process, including appeals, the legal status of Parker Brothers' copyright and trademarks on the game was not settled until 1985. The game's name remains a registered trademark of Parker Brothers, as do its specific design elements; other elements of the game are still protected under copyright law. Despite the "rediscovery" of the board game's early history in the 1970s and 1980s, and several books and journal articles on the subject, Hasbro (Parker Brothers' current parent company) did not acknowledge any of the game's history before Charles Darrow on its official Monopoly website as recently as June 2012.