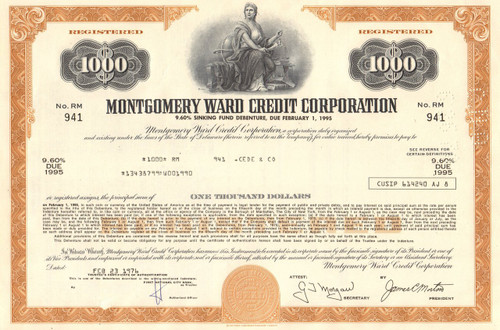 Great retail collectible. Very nice vignette of classical female figure seated with books and sailboats in the background.  Issued and cancelled. Dated in the 1970's.

Montgomery Ward was the name of two historically distinct American retail enterprises. It can refer either to the defunct mail order and department store retailer, which operated between 1872 and 2000, or to the current catalog and online retailer also known as Wards.

Montgomery Ward was founded by Aaron Montgomery Ward in 1872. Ward had conceived of the idea of a dry goods mail-order business in Chicago, Illinois. He observed that rural customers often wanted "city" goods but their only access to them was through rural retailers who had little competition and did not offer any guarantee of quality.

After several false starts, including the destruction of his first inventory by the Great Chicago Fire, Ward started his business at his first office, either in a single room in a loft above a livery stable He and two partners issued their first catalog in August 1872 which consisted of a single-sheet price list, listing 163 items for sale with ordering instructions for which Ward had written the copy.

In 1883, the company's catalog, which became popularly known as the "Wish Book", had grown to 240 pages and 10,000 items. In 1896, Wards acquired its first serious competition in the mail order business, when Richard Warren Sears introduced his first general catalog. In 1900, Wards had total sales of $8.7 million, compared to $10 million for Sears, and both companies would struggle for dominance during much of the 20th century. By 1904, the company had expanded as such that it mailed three million catalogs. Ward died in 1913, after 41 years running the catalog business. The company president, William C. Thorne died in 1917, and was succeeded by Robert J. Thorne. Robert Thorne retired in 1920 due to ill health.

In 1926, the company broke with its mail-order-only tradition when it opened its first retail outlet store in Plymouth, Indiana. It continued to operate its catalog business while pursuing an aggressive campaign to build retail outlets in the late-1920s. In 1928, two years after opening its first outlet, it had opened 244 stores. By 1929, it had more than doubled its number of outlets to 531.  Wards was very successful in its retail business. "Green awning" stores dotted hundreds of small towns across the country. Larger stores were built in the major cities. By the end of the 1930s Montgomery Ward had become the country's largest retailer.

In 1939, as part of a Christmas promotional campaign, staff copywriter Robert L. May created the character and illustrated poem of "Rudolph, the Red-Nosed Reindeer." The store distributed six-million copies of the storybook in 1946 and actor and singer Gene Autry popularized the song nationally.

In April 1944, four months into a nationwide strike by the company’s 12,000 workers, U.S. Army troops seized the Chicago offices of Montgomery Ward & Company because Avery refused to settle the strike, as requested by the Roosevelt administration because of its adverse effect on the delivery of needed goods in wartime.  Avery had refused to comply with a War Labor Board order to recognize the unions and institute the terms of a collective bargaining agreement. Eight months later, with Montgomery Ward continuing to refuse to recognize the unions, President Roosevelt issued an Executive Order seizing all of Montgomery Ward’s property nationwide, citing the War Labor Disputes Act as well as his power under the Constitution as Commander in Chief. In 1945, Truman ended the seizure and the Supreme Court ended the pending appeal as moot.

During the 1970s, the company continued to flounder. In 1973, its 101st year in business, it purchased a small discount store chain, the Miami-based Jefferson Stores, Inc. It renamed the stores Jefferson Ward. In 1976 Mobil, flush with cash from the recent rise in oil prices, acquired Montgomery Ward. By 1980, Mobil realized that the Montgomery Ward stores were doing poorly in comparison to the Jefferson stores, and decided that high quality discount units, along the lines of Dayton Hudson Company's Target stores, would be the retailer's future.

In 1985, the company closed its catalog business after 113 years and began an aggressive policy of renovating its remaining stores. It restructured many of the store layouts in the downtown areas of larger cities and affluent neighborhoods into boutique-like specialty stores, as these were drawing business from traditional department stores. In 1988, the company management undertook a successful $3.8 billion leveraged buyout, making Montgomery Ward a privately held company.

In 1987, the company began a push into consumer electronics, using the "Electric Avenue" name. Montgomery Ward greatly expanded its electronics presence by shifting from a predominantly private label mix to an assortment dominated by major brands such as Sony, Toshiba, Hitachi, Panasonic, JVC and others. In 1994, revenues increased 94% largely due to Montgomery Ward's tremendously successful direct-marketing arms. In 1997, the logo was changed to simply "Wards" which was used until the chain liquidated in 2000.

By the 1990s, however, even its rivals began to lose ground to low-price competition from Kmart, Wal-Mart, and especially Target, which eroded even more of Montgomery Ward's traditional customer base. In 1997, it filed for Chapter 11 bankruptcy, emerging from protection. On December 28, 2000, the company, after lower-than-expected sales during the Christmas season, announced it would cease operating, close its remaining retail outlets