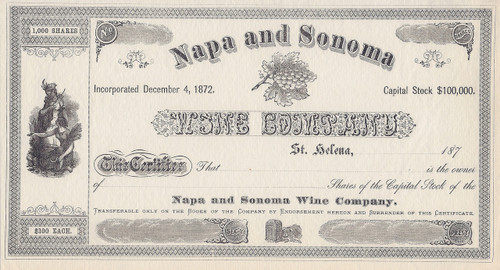 Rare early California winery circa 1872. Cool grape vignette at the center.  Indian and settler at the far left, dog and safe at the bottom. This company was based out of St Helena, center of today's popular wine country. Smaller cert, measures 5.5 by 10 inches

The winery's story began when the 27-year-old Krug left Germany in 1847 and became a teacher in Philadelphia. Inspired by the French Revolution, he returned home the next year to participate in the unsuccessful attempt to establish a German Republic and was imprisoned for nine months. He returned to Philadelphia in 1851, eventually moving to California to serve as the editor of the West Coast's first German newspaper.

Over the next several years, he worked as a farmer, road builder, gold and silver refiner, and clerk in the San Francisco Mint. In 1858, a farmer hired Krug to make wine from grapes grown in the Napa Valley. Using a cider press, Krug bottled nearly 1,200 gallons of the first wine ever made in the region. Several other local farmers subsequently hired him to make their wines and in 1861, he set up his own winery on the site of the current facility.

Despite an 1874 cellar fire and other hardships, Krug persisted in his belief that the Napa Valley could become a center of quality wine production. He was among the first to bottle vintage-dated California varietal wines and constantly sought out the best locations to grow premium grapes in the Napa region. Besides serving in various civic capacities, Krug also established the St. Helena Viticultural Society and the Napa and Sonoma Wine Company.

Upon Krug's death in 1893, James Moffitt purchased the property, and then sold it to Ceseare and Rosa Mondavi in 1943. When Cesare died in 1959, Rosa took over and with their sons, Peter and Robert, maintained the high standards and spirit of innovation that characterized Charles Krug wines. In 1966, Peter assumed control of Charles Krug's operations and Robert moved to Oakville to establish his own winery.

Peter Mondavi was the first to use French oak barrels in Napa, and developed several other winemaking advances including glass-lined tanks and cold sterile filtration. He was also among the first to recognize the potential of the Carneros region for Pinot Noir and Chardonnay. His sons, Marc and Peter Jr., are now at the helm.