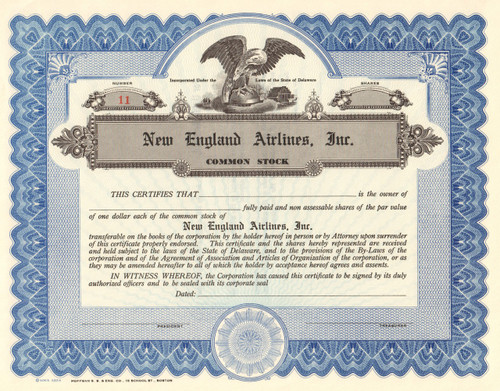 Cool aviation collectible. Great eagle vignette with ship and building in the background. Unissued and not cancelled. Circa1970 from company records.

New England Airlines is a regional airline based in Westerly, Rhode Island, USA. With a main base at Westerly State Airport, it provides scheduled service to Block Island and operates charters to other destinations. The airline was established and started operations in 1970. New England Airlines has been in continuous service since then, under the same private ownership. It was and is the only scheduled airline with its primary bases of operation in Rhode Island.

The airline is noted for its provision of cargo delivery services, including Chinese food (and other restaurant orders) delivered from the mainland to the Block Island airport in as little as 90 minutes.