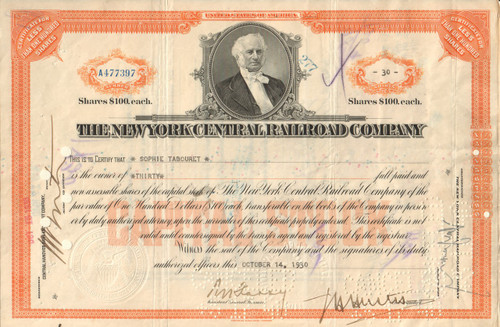 Classic railroad piece with a lot of history.  Perfect vignette of Cornelius Vanderbilt, the Commodore.  Issued and cancelled. Dates in the 1920's and 1930's's. Affordable gift idea. This is the ORANGE version.  It is a lot less common but only in fair shape (see pictures). Some wrinkling and pen marks.  Vignette not effected. Low, low price!

In broad geographic terms, the New York Central proper was everything east of Buffalo plus a line from Buffalo through Cleveland and Toledo to Chicago (the former Lake Shore & Michigan Southern Railway). NYC included the Ohio Central Lines (Toledo through Columbus to and beyond Charleston, West Virginia) and the Boston & Albany Railroad. The Michigan Central Railroad was a Buffalo-Detroit-Chicago line and everything in Michigan north of that. NYC's Grand Central Terminal in New York City is one of its best known extant landmarks.

In 1968 the NYC merged with former rival Pennsylvania Railroad to form the Penn Central, which went bankrupt by 1970.

The Watertown & Rome Railroad (W&R) was chartered in 1832 to connect Watertown, New York, with the Syracuse & Utica and the railroad opened in 1851, Meanwhile, NYC had built its own line north from Herkimer: the St. Lawrence & Adirondack (later Mohawk & Malone) . NYC merged the Mohawk & Malone in 1911 and the RW&O in 1913.

The NYC controlled the Buffalo & State Line and the Erie & North East Railroads by 1853; they were combined as the Buffalo & Erie in 1867. The Cleveland, Painesville & Ashtabula Railroad  was opened between Cleveland and Erie in 1852. In 1868 the CP&A took its familiar name, Lake Shore, as its official name, and a year later it absorbed the Cleveland & Toledo and joined with the Michigan Southern & Northern Indiana to form the Lake Shore & Michigan Southern Railway . Cornelius Vanderbilt acquired control of the LS&MS during the business panic of 1873.

Boston and Albany maintained much more of its own identity than did other NYC subsidiaries. It had its own officers, and until 1951 its locomotives and cars were lettered "Boston & Albany" rather than "New York Central Lines," largely to appeal to local sensitivities.

The New York Central System was the final name change, which took place in the summer of 1935. The NYCS was the largest of the eastern trunk systems from the standpoint of mileage and second only to the PRR in revenue. It served most of the industrial part of the country, and its freight tonnage was exceeded only by coal-carrying railroads. In addition it was a major passenger railroad — with perhaps two-thirds the number of passengers as the PRR, but NYC's average passenger traveled one-third again as far as PRR's

NYC did not share as fully in the post–World War II economic expansion because of rising labor and material costs and an extensive improvement program, especially for passenger services. Despite having several modern steam locomotives, NYC's poor financial position caused it to convert to more economical diesel-electric power rapidly. NYC also carried a substantial tax burden from governments that saw rail infrastructure as a source of property tax revenues — taxes that were not imposed upon interstate highways. The railroad was also saddled with a wartime–era tax of 15% on passenger fares, which remained until 1962.

The Central's archrival was the PRR. West of the Allegheny Mountains the two systems duplicated each other at almost every major point; east of those cites, the two hardly touched. Both railroads had physical plant not being utilized to capacity, but  aggressive consolidation left NYC in better shape. PRR was worse than practically any other railroad, having four to six tracks where one or two would do - track that was no longer needed but which was still on the tax rolls. Differences aside, NYC and PRR announced merger talks in 1957.