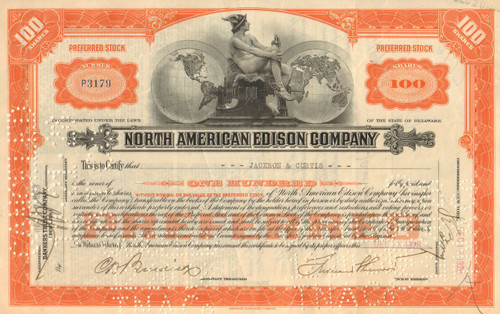 Classic collectible piece with a great vignette of the Greek god Mercury seated on an electric generator between two hemispheres of the earth.  Smaller certificate measuring  7" by 11". Issued and cancelled. Dated 1920-1930's.

The North American Company was a holding company incorporated in New Jersey on June 14, 1890, and controlled by Henry Villard, to succeed to the assets and property of the Oregon and Transcontinental Company. It owned public utilities and public transport companies and was broken up in 1946, largely to comply with the Public Utility Holding Company Act of 1935.

In 1889 New Jersey passed legislation to facilitate the control of other companies by another corporation with a goal of encouraging trusts to convert into holding companies and relocate to that state. To take advantage of these expanded corporate powers, in 1890 Oregon and Transcontinental, which was an Oregon corporation, re-incorporated as a holding company in New Jersey and became the North American Company.

By 1940, North American was a US$2.3 billion holding company directly and indirectly heading up 80 companies. It controlled ten major direct subsidiaries in eight of which it owned at least 79%. Three of the ten were major holding companies:

Four of the ten direct subsidiaries were operating companies:

The remaining three of the ten direct subsidiaries were:

At various times during its existence, North American also owned substantial interests in these other companies as well:

North American Company was broken up by the Securities and Exchange Commission, following the United States Supreme Court decision of April 1, 1946.  North American's stock was one of the twelve component stocks of the May 1896 original Dow Jones Industrial Average, but it was replaced later that same year. In 1928, when the number of stocks comprising the DJIA was increased to 30, North American was re-added to the list but was replaced again in 1930.