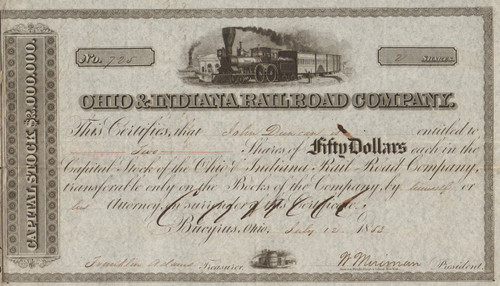 The Ohio and Indiana Railroad was chartered in Ohio on March 26, 1850 and in Indiana on January 15, 1851, to extend the line west to Fort Wayne, Indiana. It was organized July 4, 1850 and work began in February 1852. Some of the capital was gained from a merger with the Great Western Railroad of Ohio in 1851. On August 26, 1853 the line opened from Crestline west to Bucyrus, and a continuation west to Forest opened in early January 1854. On June 10 the line opened west to Delphos, and on October 31 the full line to Fort Wayne was completed, opening the next day.

On July 26, 1856 the Pittsburgh, Fort Wayne and Chicago Rail Road was formed as a consolidation of the Fort Wayne and Chicago, Ohio and Indiana, and Ohio and Pennsylvania Railroads. Extensions opened west to Warsaw September 28, Plymouth November 10, Englewood, Illinois (south of Chicago) on November 29, 1858, and Van Buren Street in Chicago on December 25, 1858. On January 1, 1859 trains started running to Chicago, with a terminal at the future location of Union Station. The part west of Plymouth was built with rails removed from the New Portage Railroad.

The Pittsburgh, Fort Wayne and Chicago Railway was a major part of the Pennsylvania Railroad system, extending the PRR west from Pittsburgh, Pennsylvania via Fort Wayne, Indiana to Chicago, Illinois. It included the current Norfolk Southern-owned Fort Wayne Line east of Crestline, Ohio to Pittsburgh, and the Fort Wayne Secondary, owned by CSX, from Crestline west to Tolleston in Gary, Indiana. CSX leased its entire portion in 2004 to the Chicago, Fort Wayne and Eastern Railroad (CFE). The remaining portion of the line from Tolleston into Chicago is now part of the Norfolk Southern's Chicago District, with a small portion of the original PFW&C trackage abandoned in favor of the parallel lines of former competitors which are now part of the modern NS system.