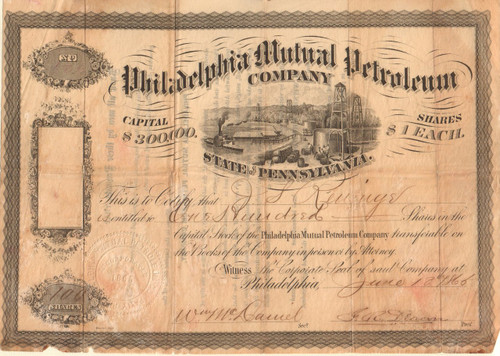 The Pennsylvania oil rush was a boom in petroleum production which occurred in northwestern Pennsylvania from 1859 to the early 1870s. It was the first oil boom in the United States.

The oil rush began in Titusville, Pennsylvania, in the Oil Creek Valley when Colonel Edwin L. Drake struck "rock oil" there. Titusville and other towns on the shores of Oil Creek expanded rapidly as oil wells and refineries shot up across the region. Oil quickly became one of the most valuable commodities in the United States and railroads expanded into Western Pennsylvania to ship petroleum to the rest of the country.

By the mid-1870s, the oil industry was well established, and the "rush" to drill wells and control production was over. Pennsylvania oil production peaked in 1891, and was later surpassed by western states such as Texas and California, but some oil industry remains in Pennsylvania. At the peak of the oil boom, Pennsylvania wells were producing one third of the world’s oil.