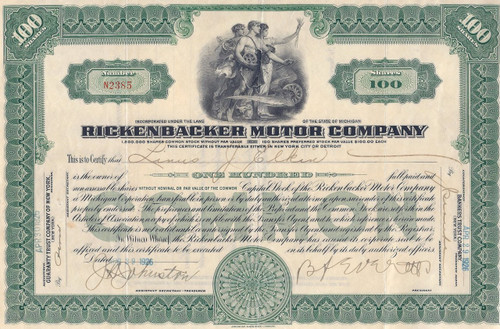 The company was established by Eddie Rickenbacker, America's leading fighter ace during World War I. He used his World War I 94th Fighter Squadron emblem depicting a top hat inside a ring. The emblems were located both on the front and the back of the cars. Rickenbacker Motor Company made sporting coupes, touring cars, sedans, and roadsters. Four wheel inside brakes were introduced in 1923. Rickenbacker made an unsuccessful attempt to merge with Peerless around 1924.

Early six-cylinder engines were joined in 1925 by an eight-cylinder engine. The model was named Vertical Eight Super Fine which referred to the advanced proprietary engine and the high quality of the cars. Although 1927 saw new models signed 6-70, 8-80 and 8-90, Rickenbacker cars were too expensive for the time and sales were poor. Before the company closed down in 1927, more than 35,000 cars had been built.

The manufacturing equipment were sold to Audi and transported to Germany, somewhat ironic since Rickenbacker renounced his supposed German heritage (he was actually of Swiss ancestry) in light of World War I. This transaction was reflected in Audi Zwickau and Dresden models, using six- or eight-cylinder Rickenbacker engines.

Edward Vernon Rickenbacker (October 8, 1890 – July 23, 1973) was an American fighter ace in World War I and Medal of Honor recipient. With 26 aerial victories, he was America's most successful fighter ace in the war. He was also a race car driver and automotive designer, a government consultant in military matters and a pioneer in air transportation, particularly as the longtime head of Eastern Air Lines.

Edward Rickenbacher was born in Columbus, Ohio, to Swiss German-speaking immigrants. From childhood, he loved machines and experimented with them, encouraged by his father's words: "A machine has to have a purpose". In what was to become one of the defining characteristics of Rickenbacker's life, he nearly died many times in events ranging from an early run-in with a horse-drawn carriage, to a botched tonsillectomy, to airplane crashes.

According to Rickenbacker's autobiography, at age thirteen, his schooling ended in grade seven after the accidental death of his father on August 26, 1904. Rickenbacker found jobs to help support the family, but he taught himself as much as he could. He aggressively pursued any chance of involvement with automobiles. Rickenbacker went to work at the Columbus Buggy Company, eventually becoming a salesman.

Rickenbacker became well known as a race car driver, competing in the Indianapolis 500 four times before World War I, and earning the nickname "Fast Eddie". Rickenbacker joined the Maxwell Race Team in 1915 after leaving Peugeot. After the Maxwell team disbanded that same year, he joined the Prest-O-Lite team as manager and continued to race improved Maxwells for Prest-O-Lite.

When, in 1917, the United States declared war on Germany, Rickenbacker had enlisted in the United States Army and was soon training in France with some of the first American troops. He arrived in France on June 26, 1917, as a Sergeant First Class. Most men chosen for pilot training had college degrees and Rickenbacker had to struggle to gain permission to fly because of his perceived lack of academic qualifications.  On April 29, 1918, Rickenbacker shot down his first plane. On May 28, he claimed his fifth to become an ace. Rickenbacker was awarded the French Croix de Guerre that month for his five victories. On May 30, he scored his sixth victory. It would be his last for three and a half months. He developed an ear infection in July which almost ended his flying career and grounded him for several weeks. He shot down Germany's hottest new fighter, the Fokker D.VII, on September 14 and another the next day. On September 24, 1918, now a captain, he was named commander of the squadron, and on the following day, he claimed two more German planes, for which he was belatedly awarded the Medal of Honor in 1931 by President Herbert Hoover.  Rickenbacker flew a total of 300 combat hours, reportedly more than any other U.S. pilot in the war.

He started the Rickenbacker Motor Company in 1920, selling technologically advanced cars incorporating innovations from automobile racing. The Rickenbacker came equipped with the first four-wheel brake system. Probably due to bad publicity from the other car manufacturers, who feared they would be unable to sell their inventory of cars with two-wheel braking, the company had trouble selling its cars and eventually went bankrupt in 1927 Eventually, all vehicles manufactured in the U.S. incorporated four-wheel braking.

Rickenbacker's most lasting business endeavor was his longtime leadership of Eastern Air Lines. Through the 1920s, he had worked with and for General Motors (GM): first as the California distributor for its new car, the short-lived Sheridan, then later as a marketer for the LaSalle,and finally as vice president of sales for their affiliate, Fokker Aircraft Company. He persuaded GM to purchase North American Aviation, a conglomerate whose assets included Eastern Air Transport. GM asked him to manage Eastern, beginning in 1935. With the help of some friends, Rickenbacker merged Eastern Air Transport and Florida Airways to form Eastern Air Lines, an airline that eventually grew from a company flying a few thousand miles per week into a major airline. In April 1938, after learning that GM was considering selling Eastern to John D. Hertz, Rickenbacker met with GM's Chairman of the Board, Alfred P. Sloan, and bought the company for $3.5 million.

Rickenbacker oversaw many radical changes in the field of commercial aviation. He negotiated with the U.S. government to acquire air mail routes, a great advantage to companies in need of business. He helped develop and support new aircraft designs. Rickenbacker bought the new, large, faster airliners for Eastern Air Lines, including the four-engined Lockheed Constellation and Douglas DC-4.

During the late 1950s, however, Eastern Air Lines' fortunes declined, and Rickenbacker was forced out of his position as CEO on October 1, 1959. Rickenbacker also resigned as the Chairman of the Board on December 31, 1963, at the age of 73.

Captain Rickenbacker suffered from a stroke while he was in Switzerland seeking special medical treatment for Mrs. Rickenbacker, and he then contracted pneumonia. Rickenbacker died on July 23, 1973 in Zürich, Switzerland. A memorial service was held at the Key Biscayne Presbyterian Church with the eulogy given by Lt. General Jimmy Doolittle, and then his body was interred in Columbus, Ohio, at the Green Lawn Cemetery.