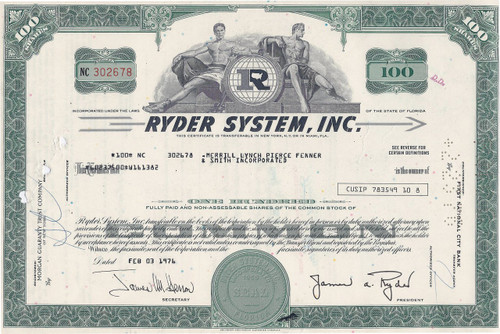 Ryder System, Inc., or Ryder, is an American-based provider of transportation and supply chain management products, and is especially known for its fleet of rental trucks. Ryder specializes in fleet management, supply chain management and dedicated contracted carriage. Ryder operates in North America, the United Kingdom and Asia. It has its headquarters in suburban Miami, Florida within Miami-Dade County.

Ryder was founded in Miami, Florida in 1933 by James Ryder as a concrete hauling company with one truck, a 1931 Model "A" Ford. Within a few years, the business expanded to leasing trucks to other companies. This led to Ryder changing its focus from distribution to leasing.

By 1939, Ryder's truck fleet had increased to 50. Ryder bought Great Southern Trucking Company in 1952. In 1955 Ryder System, Inc. was formed to combine Great Southern and Ryder Truck Rental. Ryder System went public in 1955. By the 1960s and 1970s, Ryder had expanded into the distribution and supply chain markets. James A. Ryder, founder and chairman, retired in 1978. In 2008, Ryder acquired three regional competitors: Pollock, Lily Transportation and Gator Leasing.