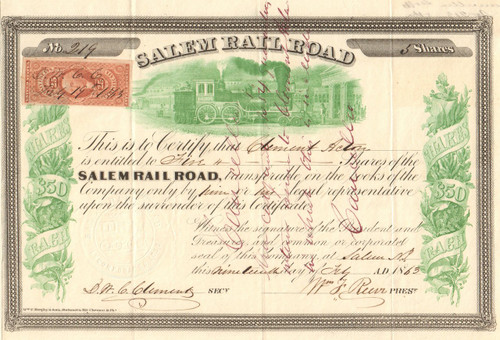 Rare NJ rail collectible.  Very nice printing of green engravings (steam at a station at the top) with black borders.  Revenue stamp to the left. Very good condition for this early issue from the company. Issued and cancelled. Typical pen cancellation on the face. Dated 1863 during the Civil War.

On May 4, 1896 the Pennsylvania Railroad (PRR) consolidated its southern New Jersey operations under the West Jersey & Seashore Railroad (WJ&S). In 1931, New Jersey's public utility regulators ordered consolidation of PRR and Reading Railroad (RDG) South Jersey operations. The PRR bought two-thirds of RDG's stock, and the consolidation, Pennsylvania-Reading Seashore Lines (PRSL), became effective June 25, 1933.[4] Passenger service on the Salem Branch ended December 30, 1950. PRSL was acquired by Conrail in 1976, including what had been known as Salem Secondary Track. Following the division of Conrail in 1999, it was designated part of Conrail Shared Assets Operations.

The southern 17.4 miles of the line and the 1.2-mile Glass House Spur to the port was sold by Conrail to Salem County in 1985. which in 1988 leased the line to Pioneer Railcorp subsidiary West Jersey Rail Company in 1988 to operate. In 1995 operations of the Salem County Branch Line were assumed by SRNJ. In 2009 U.S. Rail Corporation took over operations. In 2012 the county reassigned the contract to SRNJ. In Swedesboro, SRNJ maintains a yard and connects with CR via the Swedesboro Industrial Track and Salem Running Track.

The Salem Branch is located within Gloucester and Salem counties. The line begins in Woodbury at a junction with the Penns Grove and Vineland secondaries. It passes through West Deptford, Clarksboro/East Greenwich, Woolwich, Swedesboro, Pilesgrove, Woodstown and Mannington. After crossing Fenwick Creek at Salem, a spur continues to the Port of Salem. The line also bridges Oldman's Creek and Raccoon Creek.