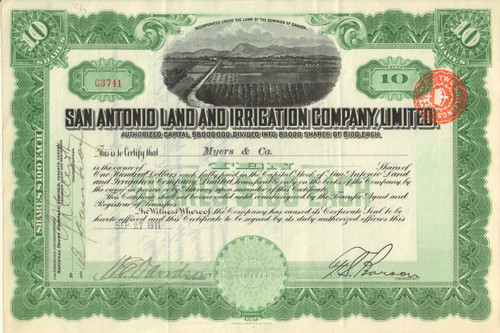 Incorporated 1911 in Canada, the company was part of the Pearson Syndicate that controlled farmland, investing in dams and irrigation canals. The company acquired 60,000 acres of agricultural land near San Antonio TX and used the Medina River for irrigation using a dam along the river 25 miles from San Antonio.  It owned share capital and bonds in the Medina Irrigation Company.  The company went bankrupt in 1914, unable to support bond funding from its operations.

Frederick Stark Pearson (1861-1915) was born in Lowell MA in 1861. After graduating from Tufts University in 1883,  started his career as math and science professor at MIT and Tufts but moved to a mining engineer career and then electrical work with the Somerville MA Electric Light Company. He soon transferred his electrical knowledge to tramway and street railway companies in Boston and Brooklyn. His expertise led him to many electric and railway project in Central and South America, most notably the Sao Paulo Tramway, Brazilian Traction Light and Power, and Rio de Janeiro Telephone.

In 1902, Pearson organized Mexican Light and Power erecting a large hydro-electric plant near Mexico City. In 1907, he took over the tramways in Mexico City and, in 1909, organized the Mexican Northwestern Railway through El Paso TX and Chihuahua MX. From these operation serving timber and agricultural parcels, Pearson expanded into San Antonio area land development.

While en route to London with his wife, he lost his life on the steamship Lusitania which was torpedoed by a German submarine May 7, 1915.