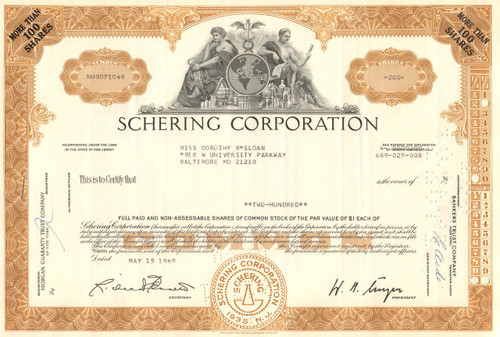 Nice collectible drug maker with a great vignette of two classical figures flanking the framed company logo on a globe with a caduceus above. Issued and cancelled. Dated in the 1960's.

Schering Corporation was a United States pharmaceutical company. It was founded in 1851 by Ernst Christian Friedrich Schering as Schering AG in Germany. In 1971, the Schering Corporation merged with Plough (founded by Memphis area entrepreneur Abe Plough in 1908) to form Schering-Plough. On November 4, 2009 Merck & Co. merged with Schering-Plough with the new company taking the name of Merck & Co.

Schering-Plough manufactured several pharmaceutical drugs, the most well-known of which were the allergy drugs Claritin and Clarinex, an anti-cholesterol drug Vytorin, ED drug Levitra,  and a brain tumor drug Temodar. These are now available from Merck & Co. Schering Plough also owned and operated the major foot care brand name Dr. Scholl's and the skin care line Coppertone. These also became a part of the new company.

Schering was founded in 1851 by Ernst Christian Friedrich Schering as Schering AG in Germany. Following the entry of the United States into World War II in 1941, U.S. President Franklin Delano Roosevelt ordered Schering AG's U.S. assets be seized. These became the Schering Corporation. The company was placed under a government administratorship until 1952, when it was released and its assets sold to the private sector. In 1957, Schering acquired White Laboratories.

Plough, Incorporated was founded by the Memphis, Tennessee area entrepreneur Abe Plough (1892–1984) in 1908 . He borrowed $125 from his father to start the business at age sixteen. As a one man business, he mixed "Plough's Antiseptic Healing Oil," a "sure cure for any ill of man or beast," and sold it off a horse-drawn buggy. Plough's acquisitions included St Joseph's Aspirin for children, Maybelline cosmetics, and Coppertone skin care products. Plough also had a broadcasting division, operating radio stations in Atlanta, Georgia; Baltimore, Maryland; Boston, Massachusetts; Chicago, Illinois; and Memphis, Tennessee.

In 1971, the Schering Corporation merged with Plough, Inc. At the time of the merger, Abe Plough became Chairman of the combined company. In 2000, Schering Plough bought a new campus in Summit, New Jersey from Novartis.

On March 9, 2009 it was announced that Schering-Plough and Merck were to merge. On November 4, 2009 Schering-Plough merged with Merck & Co. and through a reverse merger Merck became a subsidiary of Schering-Plough, which renamed itself Merck.