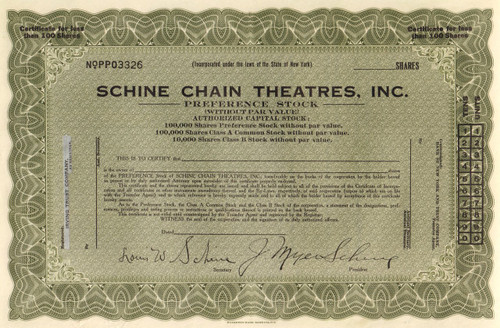 Great collectible movie theater stock with printed signatures of the founders, Louis W. Schine and Junius Myer Schine. Unissued and not cancelled. Circa 1928 from issued examples.

Printed signatures of the founders, Louis W. Schine and Junius Myer Schine.  The brothers started in 1916, eventually becoming the largest chain of movie theatres in the country before succumbing to television and poor attendance in the 1950s.

(1956) Louis Schine Dies in N.Y.  New York AV-Louis W Schine, who teamed with his brolli(er to develop niekelodeons into a multi-million dollar movie industry, died today. Schine was secretary-treasurer of Schine Enterprises, which operates more than 100 theaters in New York, Ohio. Kentucky. Maryland and Delaware. In 1917. he and his brother J Myer, who were born in Germany bought the hippodrome Theater in Gloversville for $1 500 It was a nickelodeon, with five cent tickets.

The Schine case was the third of the group of cases filed against independent circuits. In May, 1942, the Schine circuit, through five subsidiaries, operated 148 theaters in 76 towns in six states. Of these, 78 theaters were in 41 towns in New York and 36 theaters were in 17 towns in Ohio. Of the 76 towns where Schine operated, 60 were closed towns. Like the Crescent and Griffith cases, Schine was charged with combining closed and open towns for the purpose of pooling their entire circuit bargaining power in licensing films.

The District Court entered a decree enjoining these practices and requiring divestiture of more than 50 theaters in more than 40 towns. It rejected a proposed plan by the Schine interests to divide the theaters among three of the subsidiaries and make them independent except that each would be headed by a member of the Schine family.

The Supreme Court affirmed most of the injunctions but reversed the divestiture decree so that appropriate findings could be made to support it. It held the finding that Schine obtained film rental concessions not available to independents not intelligible. It held the finding that Schine cut admission prices, without additional findings of the way price cutting was used as an instrument of monopoly.

Schine also agreed to divest itself of 39 theaters. It was enjoined from acquiring any interest in additional theaters except after an affirmative showing that such acquisition would not unreasonably restrain competition. This was the period of marked decline in theater attendance and revenues. Schine found difficulty in finding theater customers at what it considered a fair price. In January, 1952, Schine was given a time extension to complete the theater sales, setting up some criteria for what was a reasonable offer that had to be accepted.

In March, 1954, both civil and criminal contempt proceedings were begun against nine of the affiliated Schine corporations and five individuals. Defendants were charged with having failed to dispose of 23 of the 39 theaters ordered sold and with conspiring to retain indirect control of theaters purportedly sold. On motion to dismiss, both of these proceedings were upheld as correct enforcement procedures. The criminal contempt case was tried first and, after a three-month trial, Judge Knight died before giving a decision. On stipulation of the parties to a new trial, the case was submitted on the record before Judge Knight, with both sides retaining the right to enter additional evidence. In December, 1956, more than 17 years after the case began, defendants were held in criminal contempt for having violated the divestiture decree. This decision was affirmed and became final in 1959.