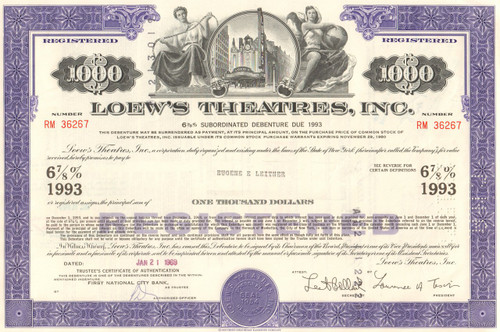 Great movie theater chain piece with a really neat vignette of seated classical figures flanking an old Loew's movie house.  Issued and cancelled. Dated in the 1960's through the 1970's. The bond is stock-sized at 8" by 12".

Loews Theatres, also known as Loews Incorporated (originally Loew's), founded in 1904 by Marcus Loew, was the oldest theater chain operating in North America until it merged with AMC Theatres on January 26, 2006. From 1924 until 1959, it was also the parent company of Metro-Goldwyn-Mayer Studios. The Loews name is still used by AMC in many markets. Its slogan was "Thank you for coming to Loews, sit back and relax, enjoy the show!!!", which was used in the chain's theater policy ads from the 1980s through the 1990s, when Sony rebranded the chain.

The company was originally called "Loew's", after the founder, Marcus Loew. In 1969, when the Tisch brothers acquired the company, it became known as "Loews".

Loew's Theatres Incorporated was founded in 1904 in Cincinnati, Ohio, by entrepreneur Marcus Loew. Loew founded a chain of nickelodeon theaters which showed short silent films in storefront locations. Soon the successful enterprise grew to include deluxe vaudeville houses and finally lavish movie palaces. Loew's theaters were found in cities from coast-to-coast, but primarily in East Coast and Midwest states.

To provide quality films for his theaters, Loew founded Metro-Goldwyn-Mayer Pictures (MGM) in 1924, by merging the earlier firms Metro Pictures, Goldwyn Pictures, and Louis B. Mayer Productions. Loew's Incorporated served as distribution arm and parent company for the studio until the two were forced to separate by the 1948 U.S. Supreme Court ruling United States v. Paramount Pictures, Inc. The two companies officially split in 1959.

In 1985, when federal regulations had been relaxed, Tri-Star Pictures (then a joint venture co-owned by Coca-Cola, also owners of Columbia Pictures at the time, CBS, and Time Inc.) acquired the Loews theater chain from Loews Corporation, the successor company to the original firm founded by Marcus Loew. Loews Corporation by this time was a holding company owned by brothers Robert and Laurence Tisch highly diversified in non-entertainment business interests ranging from hotels to insurance. CBS left Tri-Star in 1985, and HBO left the venture and Tri-Star merged with Columbia Pictures in 1987, resulting in the formation of Columbia Pictures Entertainment.

Upon the full acquisition of Tri-Star to Columbia Pictures, and when Columbia was bought from Coca-Cola by Sony in 1989, Sony inherited the theaters as well. For a while, Loews operated under the Sony Theaters banner. Coincidentally, a Sony-led partnership would later acquire MGM in 2005. In 1994, Sony partnered with Magic Johnson to form Magic Johnson Theaters, a mini-chain of theaters specifically geared toward the inner cities, particularly in Los Angeles. A year before, Sony Dynamic Digital Sound was installed in several theaters since the parent company used it as a marketing ploy to promote Sony's cinema sound division, which shut down in 2002.

In 1998, Cineplex Odeon Corporation merged with Loews Theaters to form Loews Cineplex Entertainment. The combined company was one of the largest movie exhibitors in the world, with theaters in the United States, Canada, Mexico, South Korea, and Spain. In 2001, though, the company declared Chapter 11 bankruptcy as a result of Loews management overspending. In 2002, Onex Corporation and Oaktree Capital Management acquired Loews Cineplex. In 2004, they sold Loews to a private group of investors which included the Carlyle Group. Onex retained the Canadian Loews Cineplex to form Cineplex Galaxy LP.

In 2005, AMC Theatres announced that it would merge with Loews Cineplex Entertainment and that the merged company would adopt the AMC name. The Loews name would remain a brand under the new company. At the time of the merger, Loews operated 198 theaters with 2,235 screens. It is not affiliated with its former parent, the Loews Corporation.