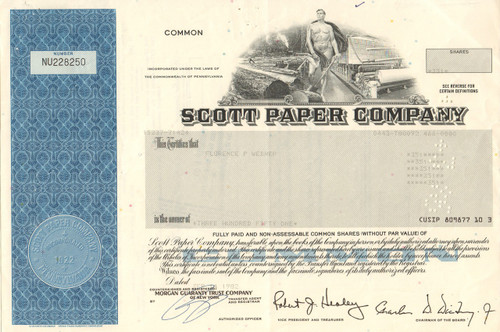 The Scott Paper Company was the world's largest manufacturer and marketer of sanitary tissue products with operations in 22 countries. Its products were sold under a variety of well-known brand names, including Scott Tissue, Cottonelle, Baby Fresh, Scottex and Viva. Consolidated sales of its consumer and commercial products totaled approximately $3.6 billion in 1994.  The company was acquired by the Kimberly-Clark Corporation in 1995.

Scott Paper was founded in 1879 in Philadelphia by brothers E. Irvin and Clarence Scott, and is often credited as being the first to market toilet paper sold on a roll. They began marketing paper towels, which were more like toilet paper, in 1907, and paper tissues in the 1930s.

In December 1994, Scott sold its printing and publishing papers business, consisting of its wholly owned subsidiary, S.D. Warren, for approximately $1.6 billion. In 1995 Scott Paper was acquired by Kimberly-Clark, which continues to use the Scott brand. Scott Paper Limited, its subsidiary in Canada, was sold and became Kruger Products.

As part of the sale of the company, the Baby Fresh baby wipes brand was sold to Procter & Gamble and is now sold under the Pampers brand. The Scotties facial tissue brand was sold to Irving Tissue. Other divested brands include Cut-Rite which was sold to Reynolds Metals in 1986.