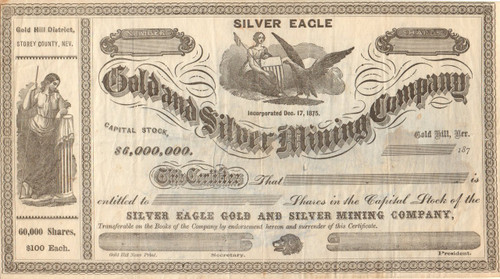 Nice older mining collectible with great vignette of eagle with Liberty holding an American flag and shield.  Nice side vignette of classical female next to a pedestal.  Unissued and not cancelled. Light fold split at bottom. Circa 1876 from company records. Dated 187_ on the certificate.

Although incorporated in Nevada 1876, the majority of shareholders were based in New York where meetings were held.  Like many mining companies of the day, investors of the East funded the mortgages and operational expenses for a large share of the profits. The business had operations in Gold Hill NV.

Gold Hill is an unincorporated community in Storey County, Nevada, located just south and downhill of Virginia City. Incorporated December 17, 1862, in order to prevent its annexation by its larger neighbor, the town at one point was home to at least 8,000 residents. Prosperity was sustained for a period of 20 years between 1868 and 1888 by mining the Comstock Lode, a major deposit of gold and silver ore. The Gold Hill post office remained in operation until 1943.

Today Gold Hill exists as a shell of its former self; its population in 2005 was 191. It is part of the Reno–Sparks Metropolitan Statistical Area. Historical remnants of the town can still be seen, including the Gold Hill Hotel, promoted as Nevada's oldest hotel, in existence since 1861; the former Bank of California building; the restored Virginia & Truckee Railroad depot; the Depression-Era Crown Point Mill; and remains of several of the mines and residences in various states of restoration and repair.