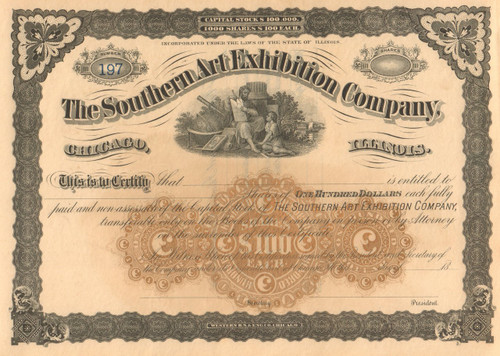 Stunning piece with a classic vignette of an artist's scene of Aristotle teaching Alexander the Great. Bold under print in gold representing the share issuance value.  Unissued and not cancelled. Dated 1885 from issued examples.

In the late 19th century, it was popular in American to produce rotunda panoramas of historical scenes. These were the biggest paintings in the world, 50 x 400 feet, housed in their own rotundas which were 16-sided polygons. While these panoramas travelled to major cities and exhibitions, in 1893, Chicago had 6 panorama companies and 6 panorama rotundas. One is believed to have been located near the 1893 Columbian Exposition. The Battle of Gettysburg opened on October 22, 1883 in its Rotunda at Wabash and Hubbard (7th Street). The other three followed: Boston, December, 1884; Philadelphia, July, 1886; and Brooklyn, October, 1886.

Mr.Pearl Wright was a New Orleans businessman who purchased 10 shares @ $1,000 of the Southern Art Exhibition Company to install Paul Paul Philippoteaux's SIEGE OF PARIS at the World's Industrial & Cotton Centennial Exposition, New Orleans 1884-5, to replace Louis Braun's BATTLE OF SEDAN. He would be chairman of the World's Panorama Exposition 1915 and was a member for Louisiana of the Republican National Committee.

The entrance fee to these remarkable illusions and pictures was 50 cents, and you could stay as long as you please, an interesting lecture being delivered meanwhile. Paris by Moonlight was the first cyclorama seen in Chicago. It was shown in the Exposition Building in 1875. Jerusalem, The Siege of Paris, Shiloh, and the Monitor and Merrimac have since been exhibited to admiring throngs. The artist who gained greatest celebrity in this work had the alarming name of Philippoteaux.

Paul Philippoteaux (1846-1923), principal artist and creator of the Gettysburg Cyclorama, first visited the battlefield in 1882. To prepare the project, he built a 30 foot platform on site to view the landscape. He studied War Department maps and conducted interviews with participants— Generals Hancock, Webb, Gibbon, and Doubleday, among others. He also relied on photographs of the battlefield taken by William Tipton. Philippoteaux first created a 1/10 scale oil study. He then sketched the entire composition in pen and ink upon which he drew grid lines and projected the drawing, with grid lines, onto the full canvas. The process of planning and executing the project took about two years.