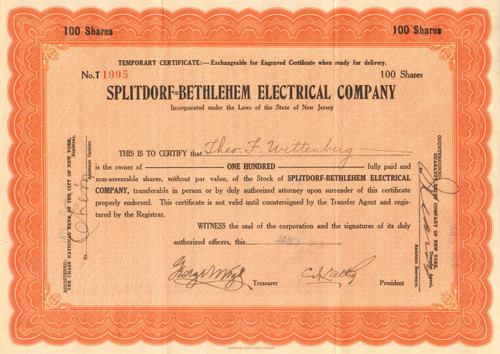 The Splitdorf Company made radios, magnetos, lighting systems, spark plugs and other electrical products. They had manufacturing operations in Newark N.J. and in Canada and produced radios throughout the 1920's. The company merged with the Thomas Edison Company in early 1930's. In addition, the Splitdorf Electrical Co. of Newark, New Jersey manufactured at least 12 different motorcycle generators from 1918 to 1931.

The Edison Company purchased the Splitdorf Radio Company on January 14, 1929, and Charles Edison was elected president.  This was a way to get a leg up on the design of their first radio line and secure RCA and Hazeltine patent licenses. The patents were needed in order to legally manufacture and sell competitive radios at that time. The first line of Edison neutrodyne radios was introduced around March 1929.  The name of the Phonograph Division was changed to the Radio-Phonograph Division in May 1929, with the national introduction of the line at the 1929 RMA Radio Show and Convention.  The Company was renamed "Edison Radio."