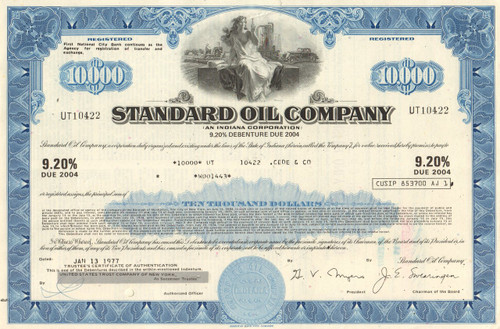 Nice stock-sized bonds with a great vignette of a classical female figure with farm, car, and refinery in the background.  Issued and cancelled. Dated 1976-1977.

Standard Oil Co. Inc. was an American oil producing, transporting, refining, and marketing company. Established in 1870 by John D. Rockefeller as a corporation in Ohio, it was the largest oil refiner in the world of its time. Its controversial history as one of the world's first and largest multinational corporations ended in 1911, when the United States Supreme Court ruled that Standard was an illegal monopoly.

Standard Oil dominated the oil products market initially through horizontal integration in the refining sector, then, in later years vertical integration; the company was an innovator in the development of the business trust. The Standard Oil trust streamlined production and logistics, lowered costs, and undercut competitors. "Trust-busting" critics accused Standard Oil of using aggressive pricing to destroy competitors and form a monopoly that threatened consumers.

John D. Rockefeller was a founder, chairman and major shareholder. With the dissolution of the Standard Oil trust into 33 smaller companies, Rockefeller became the richest man in the world. Other notable Standard Oil principals include Henry Flagler, developer of the Florida East Coast Railway and resort cities, and Henry H. Rogers, who built the Virginian Railway.

In response to state laws trying to limit the scale of companies, Rockefeller and his associates developed innovative ways of organizing, to effectively manage their fast growing enterprise. On January 2, 1882, they combined their disparate companies, spread across dozens of states, under a single group of trustees. By a secret agreement, the existing thirty-seven stockholders conveyed their shares "in trust" to nine Trustees: John and William Rockefeller, Oliver H. Payne, Charles Pratt, Henry Flagler, John D. Archbold, William G. Warden, Jabez Bostwick, and Benjamin Brewster. This organization proved so successful that other giant enterprises adopted this "trust" form.

In 1896, John Rockefeller retired from the Standard Oil Co. of New Jersey, the holding company of the group, but remained president and a major shareholder. Vice-president John Dustin Archbold took a large part in the running of the firm. At the same time, state and federal laws sought to counter this development with "antitrust" laws. In 1911, the US Justice Department sued the group under the federal antitrust law and ordered its breakup into 39 companies.

By 1890, Standard Oil controlled 88 percent of the refined oil flows in the United States. The state of Ohio successfully sued Standard, compelling the dissolution of the trust in 1892. But Standard simply separated Standard Oil of Ohio and kept control of it. Eventually, the state of New Jersey changed its incorporation laws to allow a company to hold shares in other companies in any state. So, in 1899, the Standard Oil Trust, based at 26 Broadway in New York, was legally reborn as a holding company, the Standard Oil Co. of New Jersey (SOCNJ), which held stock in 41 other companies.

In 1904, Standard controlled 91 percent of production and 85 percent of final sales. Most of its output was kerosene, of which 55 percent was exported around the world. The federal Commissioner of Corporations studied Standard's operations from the period of 1904 to 1906 and concluded that "beyond question... the dominant position of the Standard Oil Co. in the refining industry was due to unfair practices—to abuse of the control of pipe-lines, to railroad discriminations, and to unfair methods of competition in the sale of the refined petroleum products". Due to competition from other firms, their market share had gradually eroded to 70 percent by 1906 which was the year when the antitrust case was filed against Standard, and down to 64 percent by 1911 when Standard was ordered broken up and at least 147 refining companies were competing with Standard including Gulf, Texaco, and Shell.

In 1909, the US Department of Justice sued Standard under federal anti-trust law, the Sherman Antitrust Act of 1890, for sustaining a monopoly and restraining interstate commerce by:

"Rebates, preferences, and other discriminatory practices in favor of the combination by railroad companies; restraint and monopolization by control of pipe lines, and unfair practices against competing pipe lines; contracts with competitors in restraint of trade; unfair methods of competition, such as local price cutting at the points where necessary to suppress competition; [and] espionage of the business of competitors, the operation of bogus independent companies, and payment of rebates on oil, with the like intent."

Standard's president, John D. Rockefeller, had long since retired from any management role. But, as he owned a quarter of the shares of the resultant companies, and those share values mostly doubled, he emerged from the dissolution as the richest man in the world. The dissolution had actually propelled Rockefeller's personal wealth.