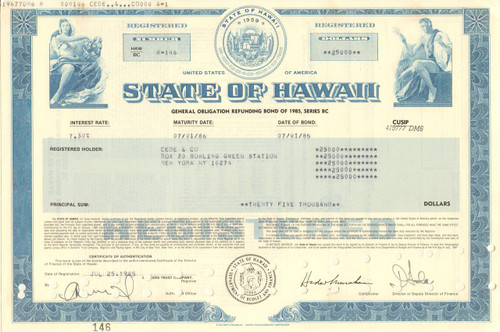 Fun collectible.  Fantastic vignette of the Hawaii state seal at the top, classical male and female figures in the corners.  Issued and cancelled. Dated 1985.

Hawaii is one of four U.S. states—apart from the original thirteen—the Vermont Republic (1791), the Republic of Texas (1845), and the California Republic (1846)—that were independent nations prior to statehood. Along with Texas, Hawaii had formal, international diplomatic recognition as a nation.

The Kingdom of Hawaiʻi was sovereign from 1810 until 1893 when the monarchy was overthrown by resident American and European capitalists and landholders in a coup d'état. Hawaii was an independent republic from 1894 until August 12, 1898, when it officially became a territory of the United States. Hawaii was admitted as a U.S. state on August 21, 1959.

In January 1893, Queen Liliʻuokalani was overthrown and replaced by a provisional government composed of members of the American Committee of Safety. American lawyer Sanford B. Dole became President of the Republic when the Provisional Government of Hawaii ended on July 4, 1894. Controversy ensued in the following years as the Queen tried to regain her throne. The administration of President Grover Cleveland commissioned the Blount Report, which concluded that the removal of Liliʻuokalani had been illegal. The U.S. government first demanded that Queen Liliʻuokalani be reinstated, but the Provisional Government refused.

After William McKinley won the 1896 U.S. presidential election, advocates pressed to annex Hawaii. The previous president, Grover Cleveland, was a friend of Queen Liliʻuokalani. McKinley was open to persuasion by U.S. expansionists and by annexationists from Hawaiʻi. After negotiations in June 1897, Secretary of State John Sherman agreed to a treaty of annexation with these representatives of the Republic of Hawaii. The U.S. Senate never ratified the treaty. Despite the opposition of most native Hawaiians, the Newlands Resolution (1898) was used to annex the Republic to the U.S.; it became the Territory of Hawaii.

In 1900, Hawaii was granted self-governance and retained ʻIolani Palace as the territorial capitol building. Despite several attempts to become a state, Hawaii remained a territory for sixty years. Plantation owners and capitalists, who maintained control through financial institutions such as the Big Five, found territorial status convenient because they remained able to import cheap, foreign labor. Such immigration and labor practices were prohibited in many states.

In March 1959, Congress passed the Hawaii Admission Act, which U.S. President Dwight D. Eisenhower signed into law. The act excluded Palmyra Atoll from statehood; it had been part of the Kingdom and Territory of Hawaii. On June 27, 1959, a referendum asked residents of Hawaii to vote on the statehood bill; 94.3% voted in favor of statehood and 5.7% opposed it. The referendum asked voters to choose between accepting the Act and remaining a U.S. territory. The United Nations' Special Committee on Decolonization later removed Hawaii from its list of self-governing territories. After attaining statehood, Hawaii quickly modernized through construction and a rapidly growing tourism economy. Later, state programs promoted Hawaiian culture. The Hawaii State Constitutional Convention of 1978 created institutions such as the Office of Hawaiian Affairs to promote indigenous language and culture.