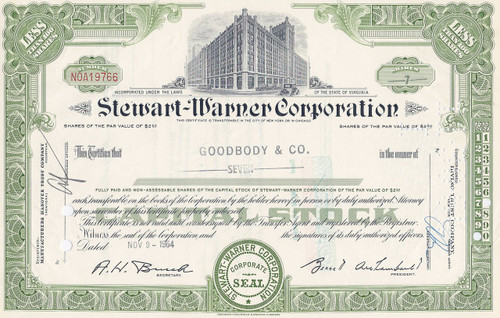 Stewart-Warner is a US manufacturer of vehicle instruments. The company was founded as Stewart & Clark Company in 1905 by John K. Stewart. Their speedometers were used in the original Model T Fords. In 1912, John Stewart joined with Edgar Bassick to make vehicle instruments and horns. Bassick owned Alemite Co and Stewart had bought the Warner Instrument Company, thus the name was changed to Stewart-Warner Corporation. The company started in Chicago and built a manufacturing plant on Diversey Parkway.

The building kept expanding and finally covered one-million square feet and six floors. They also made radios and refrigerators, and produced the ubiquitous "zerk" grease fitting, named after its inventor, associated with the company. In the last years of the company's Chicago factory, it owned a number of aging six-spindle Brown & Sharpe and New Britain screw machines. They also made heat exchangers starting in the 1940s under the "South Wind Division", but since then it became independent of its parent, but still uses the Stewart-Warner name.