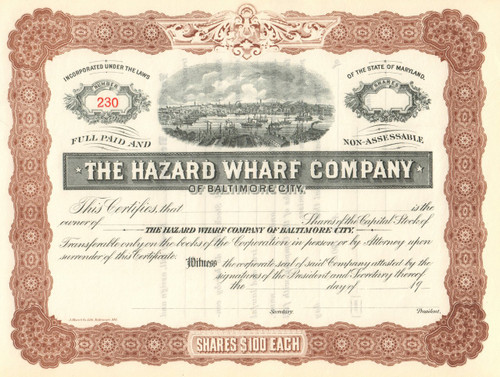 Great vignette on this collectible stock of the Baltimore Harbor with steam ships and warehouses along the water. Unissued and not cancelled.  Dated 19__ but circa 1900's from company records. 50's.

Incorporated in 1902, the Hazard Wharf Company operated 9 acres with 1100 feet of water frontage in the upper harbor of Baltimore, MD.   It purchased the Fidelity Warehouse and other nearby properties for transfer and storage of goods in the harbor.  The company also provided mortgages and leases for other warehouse and shipping companies.

The Inner Harbor is a historic seaport, tourist attraction, and landmark of the city of Baltimore, Maryland, USA. It was described by the Urban Land Institute in 2009 as “the model for post-industrial waterfront redevelopment around the world.” The Inner Harbor is located at the mouth of Jones Falls, creating the wide and short northwest branch of the Patapsco River. The district includes any water west of a line drawn between the foot of President Street and the American Visionary Art Museum.

The name "Inner Harbor" is used not just for the water but for the surrounding area of the city, with approximate street boundaries of President Street to the east, Lombard Street to the north, Greene Street to the west, and Key Highway on the south. The harbor is within walking distance of Camden Yards and M&T Bank Stadium. A water taxi connects passengers to Fells Point, Canton, and Fort McHenry.