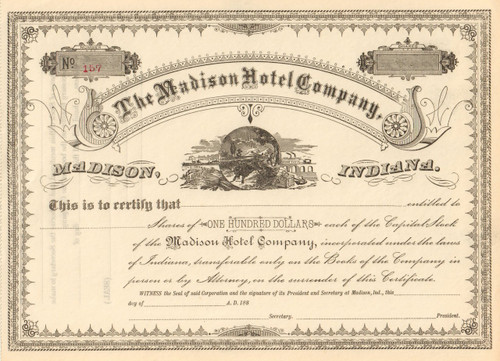 Affordable hotel piece with a great engraved vignette of the seal of Indiana (running buffalo) flanked by farming and railroad scenes.  Unissued and not cancelled.  Circa 1889 from issued examples. Printed 188_ on the certificate.

Incorporated in 1848, The Madison Hotel Company operated a large lodge to support the growing town of Madison, Indiana.  The company later reorganized and built a large hotel in the late 1880's.  During depression it was sold to the La Salle-Madison Hotel company, which in turn was controlled by the Central Life Assurance society of Des Moines, lA.