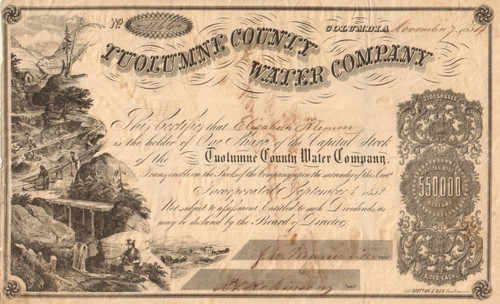 Fantastic collectible with a stunning mining engraved scene that takes up the entire left border of the certificate.  Light glue stains at the far left from ledger return; rough left edge near the border. Issued and cancelled. Dated 1854. Very desirable piece in the collector market.

Incorporated 1852, the company was a supplier of water for mining and sluicing operations near Yosemite.  Tuolumne County is one of the original counties of California, created in 1850 at the time of statehood. Prior to statehood, it had been referred to as Oro County. Parts of the county were given to Stanislaus County in 1854 and to Alpine County in 1864.

After the first discovery of gold in Tuolumne County at Woods Creek near present day Jamestown in the summer of 1848,camps sprang up throughout the foothills.  A steady supply of water was searched for in various areas near the major rivers, resulting in diverting and transporting water primarily for mining purposes.

The first water company incorporated in 1852 was named Tuolumne County Water Company (TCWC).  It started in Columbia and tapped water from the South Fork of the Stanislaus River.  A competing company, Columbia and Stanislaus River Company (CSRWC), was formed in 1854, tapping water from the Main Fork of the Stanislaus River.  The CSRWC was formed because the miners were being charged exorbitantly high rates for water usage by the TCWC.  The Tuolumne County Water Company (which later merged with several others to become the Sierra and San Francisco Power Company) built a series of three dams between 1853 and 1856 along the South Fork Stanislaus River, the lowest turned Strawberry Flat into Lake Edna, the second created Lake Eleanor, and lastly Lake Gertrude.

Water disputes were very common during the last half of the 1800s, which led to fighting and murder in some cases.  An excerpt from the journal of William H. Brewer, scientist with the Whitney’s Geological Survey of California, illustrates this colorful event:“Sonora, like Columbia, is a mining town…and there are several other mining villages very near–all owing to the rich placers of the region.  Water for washing this dirt is brought from the Stanislaus River, over and through a very rough country, in a ditch over sixty miles long!  And here is a Californian history.  A ditch supplied water, but the miners thought the water rates entirely too high, so they would build an opposition ditch.”

With the general exodus from the county after the placers became exhausted, many of the ditches were abandoned; but the mining lodes later attracted attention and new laterals were dug to supply the quartz mines, many of which were rich producers into the 1950s.  The present system was united into one organization from the properties of a number of separate and independent companies, which ceased to operate after selling their water rights and canals to the Sierra and San Francisco Power Company.