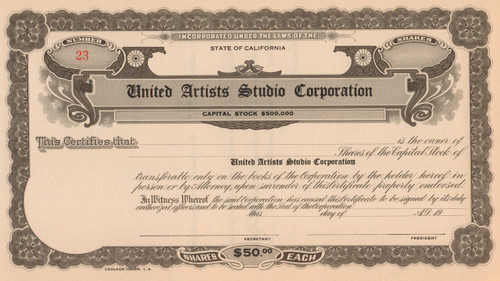 Very rare movie collectible with elaborate printing throughout.  Unissued and not cancelled. Circa 1926 from issued examples. Dated 19__ on the certificate.

Originally founded as "Pickford-Fairbanks Studios" in 1918, the company was incorporated as United Artists Studio 1919 in California. After a successful beginning to his acting career, Douglas Fairbanks became a founding member of United Artists, along with Mary Pickford, Charlie Chaplin, and D.W. Griffith. Sam Goldwyn later became a partner of the lot. It was the first studio where actors were given control over the films they were in, and therefore the image that they conveyed to the world. Up until this point the studio’s had complete control, leaving the actors helpless to the outcomes of their careers. Therefore, this move by Fairbanks and his contemporaries ushered in a new, more successful era of actor-studio relationships. Robert Fairbanks, brother of Douglas, was the president.

UA's first film was His Majesty, the American by and starring Fairbanks was a success. There was limited funding for movies at the time. Without selling stock to the public like the other studios of the time, all United had to work with was weekly prepayment installments from theater owners for the upcoming movies. Thus production was slow with the company distributing for the first five years averaging five films.

Over the next couple of years, under the United Artists Label, Fairbanks appeared in films that were highly successful, and solidified his position as a superstar including: The Mark Of Zorro(1920), The Three Musketeers(1921), and Robin Hood(1922). The Mark of Zorro established Fairbanks’ image as an extra-masculine figure, while it defined and popularized the swashbuckler genre . Although The Three Musketeers has not lived up to the bar set by The Mark of Zorro, it is still lauded for it’s incredible action scenes and seen as an exceptional silent film costume drama. With the success of Robin Hood Fairbanks “ushered in a new era of motion pictures, emphasizing an elaborate scale of production—along with a high level of artistry—that was an important achievement in the development of cinema.

By 1924, by which time Griffith had dropped out, the company was facing a crisis: either bring in others to help support a costly distribution system or concede defeat.[citation needed] The veteran producer Joseph Schenck was hired as president. Not only had he been producing pictures for a decade, but he brought along commitments for films starring his wife, Norma Talmadge, his sister-in-law, Constance Talmadge, and his brother-in-law, Buster Keaton. Contracts were signed with a number of independent producers, most notably Samuel Goldwyn, and Howard Hughes. In 1933, Schenck organized a new company with Darryl F. Zanuck, Twentieth Century Pictures, which soon provided four pictures a year to UA's schedule and was half the schedule.

Schenck also formed a separate partnership with Pickford and Chaplin to buy and build theaters under the United Artists name. They also began international operations, first in Canada, then in Mexico, and by the end of the 1930s, United Artists was represented in over 40 countries.

Schenck resigned in 1935 when an ownership share was denied, Schenck left which set up 20th Century Pictures' merger with Fox Film Corporation to form 20th Century Fox. Schenck was succeeded by Al Lichtman as company president. A number of other independent producers distributed through United Artists in the 1930s including Walt Disney Productions, Alexander Korda, Hal Roach, David O. Selznick and Walter Wanger. As the years passed and the dynamics of the business changed, these "producing partners" drifted away, Samuel Goldwyn Productions and Disney to RKO and Wanger to Universal Pictures.

In the late 1930s, UA actually turned a profit while Samuel Goldwyn Productions was providing most of the output for distribution. Goldwyn sued United several times for disputed compensation leading Goldwyn Productions to leave. MGM's 1939 hit, Gone With the Wind, the top money maker of all time, was supposed to be a UA release except for the fact Selznick wanted Clark Gable to play Rhett Butler, but Gable was under contract to MGM. Also that year Fairbanks died.

In the 1950's, the company had two hits, The African Queen and High Noon. After several iterations as a private company, United Artists went public again in 1957 with a $17 million stock and debenture offering. In 1961, United Artists released West Side Story which won a record ten Academy Awards. On the basis of its fantastic string of film and television hits in the 1960s, the company was an attractive property, and in 1967, 98% of UA stock were purchased by the San Francisco-based insurance giant, the Transamerica Corporation. Transmerica selected David and Arnold Picker to lead UA. In 1980, the Transamerica leadership decided the company should exit the film making business, and United Artists was put up for sale. Kirk Kerkorian's Tracinda Corp. purchased the company.  Tracinda also owned Metro-Goldwyn-Mayer which was combined with United Artists in 1981. The merged companies became MGM/UA Entertainment Company.