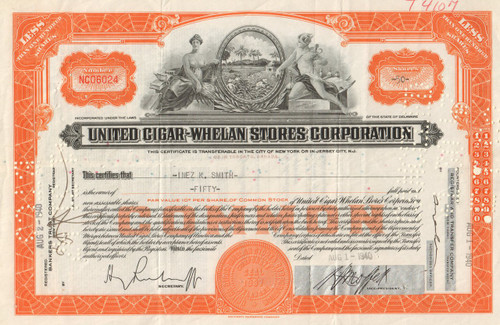 Founded in 1901, United Cigar Stores was the largest chain of cigar stores in the United States. Though initially specializing in cigars, it eventually sold many other items, such as Mickey Mouse watches and shoe trees. The chain represented the interests of the Consolidated Tobacco Company, the tobacco trust that controlled the American Tobacco Company and others. In September 1903 a settlement was reached with the chain's competitors and all competition ended.  In 1912, George Whelan put his United Cigar Stores company under a new holding company, Tobacco Products Corporation, and immediately started buying small tobacco independents.

The company was controlled by Whelan-Schulte interests, but control passed to brothers George Kenan and Frederick Kenan Morrow in August 1929. The company also was in real estate. As the Depression deepened the real estate subsidiary accumulated huge losses, so in September 1932 the holding company declared bankruptcy. Before its bankruptcy it had 975 cigar stores and 219 drug stores, but most of its assets were in real estate. The chain recovered and had 1300 outlets in 1951.

United Cigar Stores became part of United Cigar-Whelan Stores Corp., then United Whelan Corp. In 1962, this was merged into Perfect Film & Chemical Corp., a film-processing and mail-order seller of drugs and vitamins.