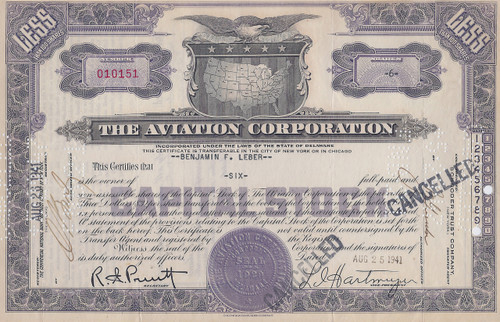 Great vignette of an eagle on top of a map of the US over an American shield.  Issued and cancelled. Dated in the 1940's.

Investors Sherman Fairchild provided capital to prevent a takeover of CAM-24 operator Embry-Riddle Company by Clement Melville Keys who planned on buying Curtiss aircraft rather than Fairchild's. With capital from Fairchild, George Hann, the Lehman Brothers, and W.A. Harriman, the Aviation Corporation was formed on March 2, 1929 as a holding company tasked with acquiring small airlines. By the end of 1929, it had acquired interests in over 90 aviation-related companies. In January 1930, the board broke off the airlines into Colonial and Universal Air Lines. Universal Air Lines name was changed to American Airways, the predecessor of American Airlines.

Avco's affiliated company, Avco Financial Services, was spun off to Associates First Capital in 1998, which itself was acquired by Citigroup in 2000.