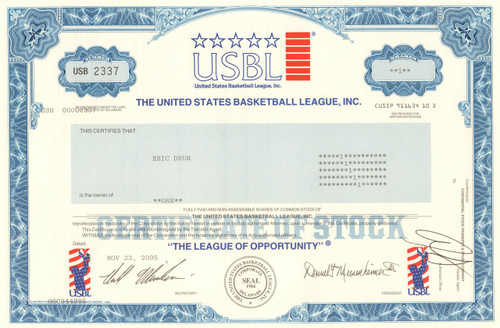 Great hoops collectible.  Nice vignette of the company logo with another USBL logo at the bottom right and left. Issued and not cancelled. Dated 2005.

The USBL started in 1985 as one of the first basketball leagues to play a late-spring to early-summer schedule. The league quickly became known as a development league for players, with many players moving up to the NBA and many more playing in Europe after stints here. In 1996, the league made a stock offering, a rarity among sports leagues. However, in later years, the league declined as rival leagues appeared and USBL had a tougher time replacing teams that folded. In the last two seasons, the league was mainly a Midwestern league, with teams mainly in Kansas, Nebraska, and Oklahoma.

After speculation that the USBL might fold after the 2007 season, the league announced that it would sit out the 2008 season and consider its options for the future. It has not since restarted. In January 2010, the league expressed hopes to resume play in April 2010. However, no further news has surfaced from the league.