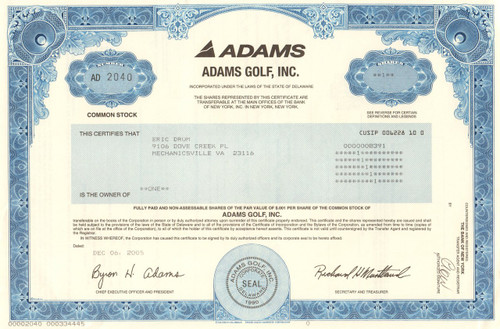 Adams Golf, Inc. is a golf club manufacturer based in Plano, Texas. In 1983 Barney Adams joined Dave Pelz Golf in Abilene, Texas. When Pelz's Preceptor Golf went bankrupt in 1988, Adams bought the assets and started Adams Golf. He moved the company to Dallas, Texas in 1991.

In 1998 Adams Golf went public on Wall Street, with an initial public offering underwritten by Lehman Brothers. Barney Adams was selected as Manufacturing Entrepreneur of the Year by Ernst & Young in 1999. Although semi-retired since 2000, Barney Adams retains the title Chairman of the Board. In 2012, Adams Golf was acquired by Taylormade Adidas Golf.