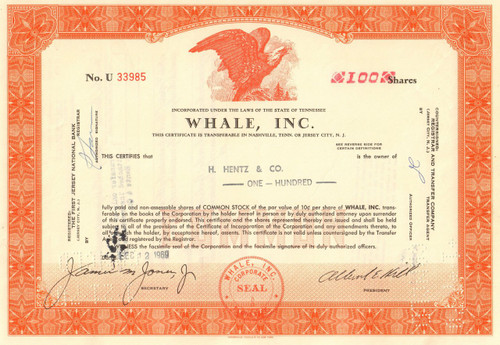 Great vignette of a perched eagle in the same color as the vignette.   Issued and cancelled. Dated 1969. Fun company name!

The Hooker brothers started Whale in 1967 in an attempt to form a “conglomerate” of sorts that might diversify their holdings. After buying a couple of small unrelated companies, Whale bought a group of California Minnie Pearl’s franchises. After going public, Whale’s stock shot from $2 to over $50 dollars a share, making it possible for the company to make several other purchases.

After a couple of years of acquiring assets at a remarkable rate, Whale began to have serious financial problems. For several months, John Jay and Henry Hooker managed to keep the company afloat by moving assets from one part of the company to another. But by the summer of 1969, Whale’s stock was sliding fast.

The revelations about Performance Systems Inc. that surfaced in 1970 are too numerous to detail. But in general, the company had lost enormous amounts of money in its attempt to build a chain of fried chicken outlets overnight. Meanwhile, several divisions of Whale—some of which had long histories of making money—were now losing it.  In February, PSI stated it had lost $5.5 million during the first half of 1969. About that time, PSI came under investigation by the Securities and Exchange Commission (SEC) for its accounting practices. By March, the Nashville business had become so infamous that a Fortune article said “the classic example of what can happen to an unsophisticated entrepreneur is provided by the trials and tribulations of Performance Systems Inc., once known as Minnie Pearl’s Chicken Systems Inc.”

PSI’s 1969 report was supposed to have been filed with the SEC in April 1970. In July, the SEC announced that the company still had not filed the report and had been given even more time. The annual report also stated that the company’s revenues were insufficient to meet its day-to-day needs and that it no longer had the ability to borrow money. PSI stock, which once sold at $67 a share, fell to 44 cents.

About the same time, Whale declared bankruptcy, turning several Nashville employers over to the hands of a receiver. Some of Whale’s assets, such as Benson Printing, Dolphin Tool, and Cole Steel, were later returned to the entities from which Whale had bought them. Temco, which once had over 700 employees, now had about one-tenth that number. Nashville Bridge Co., which had a 70-year record of building bridges, barges, and buildings all over the South, was taken over by a bank that sold it to the American Ship Building Co. of Ohio.