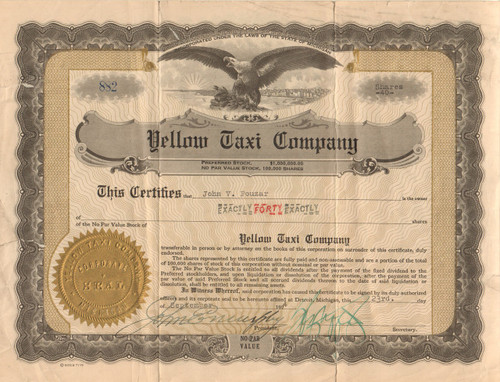 Uncommon automotive stock with an eagle vignette with a seaside town in the background.  Issued and not cancelled (very rare). Dated 1924-1925. Splits at folds that might not be visible in image from flatbed scanning.

Incorporated in 1922, this Detroit Michigan company was founded by John Murphy, Charles Murphy, Charles Williams, and Robert Brougham.  The company was formed for the "purpose of engaging in business of operating motor vehicles for hire and to manufacture taxis and other motor vehicles used in connection with its own operations and for sale."  The company merged the Yellow Taxicab Company and the Taxicab Service Company with its formation.  Detroit was described as taxi poor city due to the bus lines and streetcars.  The founders found that they could offer door service for rates cheaper than many bus routes.