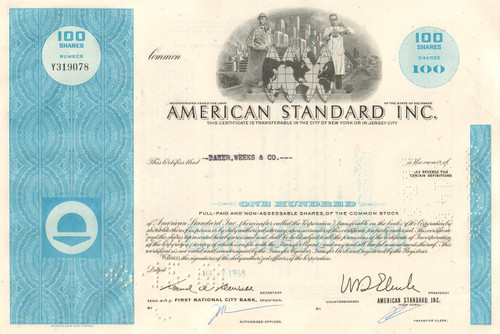 Cool collectible stock with a nice vignette of a construction worker and a chemist in front of city scenes with a map of the earth.  Stylized logo of a toilet in the border. Issued and cancelled. Dated 1960's.

The company was formed in 1929 through the merger of the American Radiator Company and Standard Sanitary Manufacturing Company forming the American Radiator and Standard Sanitary Corporation. The group was renamed to the "American Standard Corporation" in 1967. The company divested all but the HVAC business in 2007, and renamed itself Trane. Trane was acquired by Ingersoll Rand in 2008.

In 1984 the group acquired HVAC company Trane. In 1999, American Standard purchased control of the United Kingdom-based Armitage Shanks and Ceramica Dolomite of Italy from Blue Circle Industries for $430 million.

On 1 February 2007, the company announced it would break up its three divisions. The plan included the sale of its kitchen and bath division; and the spinoff of its vehicle control systems business; the remainder of the company, primarily its air conditioning business was to be retained, and renamed "Trane":

The vehicle controls division was spun off, forming WABCO Vehicle Control Systems. The kitchen and bathroom division was sold off: Bain Capital Partners acquired the division for $1.745 billion.  Bain Capital sold the North American and Asian operations to Sun Capital and Lixil Group respectively, whilst retaining the European and Latin American operations as Ideal Standard. The North American operations became American Standard Americas, whilst the global business became Ideal Standard. The remainder of the company held was renamed, taking the name of its heating and air conditioning subsidiary Trane. Ingersoll Rand made an offer to acquire the company on December 17, 2007, and the sale was completed on June 5, 2008.