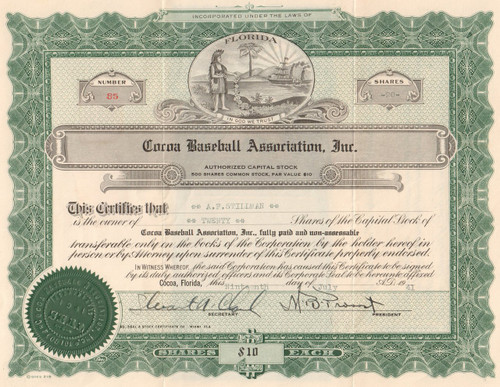 Uncommon baseball collectible. Nice vignette of a stylized state seal of Florida. Issued and not cancelled. Dated 1941. Signed by M. Breese Provost whose father, Charles Provost, was the namesake of the ballpark - Provost park.

Incorporated  February 1941 in Cocoa FL, the organization ran a minor league team (Cocoa Fliers) in Florida. Unfortunately, the team was short-lived due to the war starting in December 1941.  They played in the Florida East Coast League (Class D). The team was disbanded in 1942 due to WW2 and never reorganized. The company was dissolved in 1945.

In 1941, War was on the horizon in Cocoa. Germany occupied most of Europe. U-Boats would soon prowl the waters off Florida. Locals were organizing citizen defense organizations. The 1940s also brought professional baseball. The short life of the Cocoa Fliers, the area’s first minor league baseball team, was chronicled in the Cocoa Tribune:

Cocoa is ready to become one of those cities enjoying organized baseball, it was announced this week following a meeting of baseball fans held at the city hall Friday night, when a temporary set of officials was selected to supervise the negotiations for securing a franchise in the league.

The decision to organize a baseball club corporation here came following the invitation extended by the Florida East Coast League to become a member.

At the present time the City of Cocoa is building a regulation baseball park and athletic field in Virginia Park. Trees have been cut from the plot and stumps of the trees will be pulled out this week, so that the area may be plowed and leveled. A fence will be placed around the park and suitable grandstand and bleacher accommodations built for the fans.

The team needed a name. The owners wanted to use the local traditional name “Indians” but that was taken by the West Palm Beach team in the league, so they decided to hold an open contest. The person with the winning entry would receive a season’s pass to all 1941 home games. he Tribune announced on March 20 that the name “Fliers” had been chosen for the team. The winning entry was submitted by W.J. Murdock, a grocery store operator. The answer associated Cocoa with the Banana River Naval Air Base.