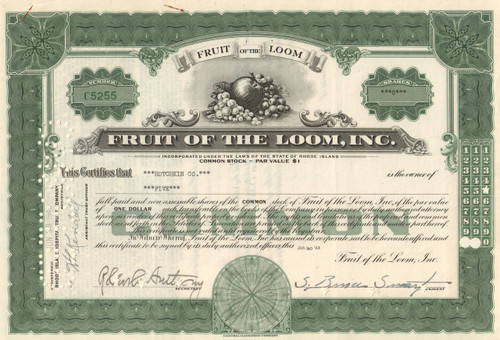 Fantastic collectible old stock certificate.  Perfect vignette of the iconic fruit logo with the company name on a banner above.  Issued and cancelled. Some rust stains from staples in the borders. Dated 1940-1960's.

Fruit of the Loom is one of the largest manufacturers and marketers of men's and boys' underwear, women's and girls' underwear, printable T-shirts and fleece for the active wear industry, casual wear, women's jeans wear and childrens wear. The company employs more than 32,000 people worldwide. Fruit of the Loom also controls another long-known underwear brand, B.V.D. (Bradley, Voorhees, and Day). Brands once owned or marketed by Fruit of the Loom include Gitano, Munsingwear, Salem Sportswear, and Pro Player, which once had the naming rights to what is now Sun Life Stadium (originally Joe Robbie Stadium) in Miami Gardens, Florida from 1996 to 2005. The company's familiar logo comprising a red apple, leaves, green grapes, currants, and purple grapes forms a widely recognizable trademark. The company is a vertically integrated manufacturer.

The Fruit of the Loom brand dates back to 1851 in Rhode Island when Robert Knight, a textile mill owner, visited his friend, Rufus Skeel. Mr. Skeel owned a small shop in Providence, Rhode Island that sold cloth from Mr. Knight's mill. Mr. Skeel's daughter painted images of apples and applied them to the bolts of cloth. The ones with the apple emblems proved most popular. Mr. Knight thought the labels would be the perfect symbol for his trade name, Fruit of the Loom.

In 1871, just one year after the first trademark laws were passed by Congress, Mr. Knight received trademark number 418 for the brand, Fruit of the Loom. The company was part of Northwest Industries, Inc., until NWI was purchased by William F. Farley in 1985 and renamed Farley Industries, Inc. Fruit of the Loom's sales revenue rose from approximately $500 million at the time of NWI's purchase to roughly $2.5 billion nearly 15 years later.

Fruit of the Loom filed for Chapter 11 bankruptcy protection in 1999 shortly after posting a net loss of $576.2 million. Reasons for the bankruptcy are varied. William F. Farley, the company's former chairman, chief executive officer, and chief operating officer was forced out prior to bankruptcy in late 1999, after having piloted the company into massive debt and unproductive business ventures, including structuring the company into an off-shore entity in the Cayman Islands to avoid taxes.

The company was bought from bankruptcy by Berkshire Hathaway Corporation, controlled by investor Warren Buffett, who wanted the valuable brand. He agreed in January 2002 to purchase the company for approximately $835 million in cash. A condition of the purchase required that former Chief Operating Officer and the then interim CEO, John Holland, remain available to be the CEO for the company. The company purchased Russell Corporation, effectively taking the former competitor private in a deal that was completed August 1, 2006. The company announced the purchase of VF Corporation's intimate apparel company named Vanity Fair Intimates for $350 million in cash on January 23, 2007.