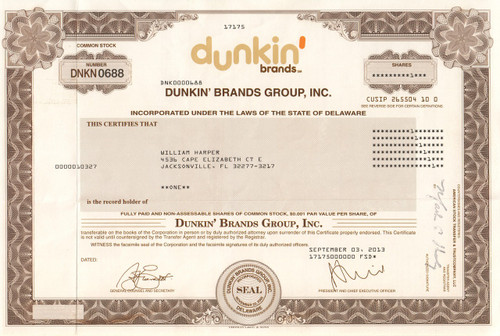 The Dunkin Dounts name has evolved since William Rosenberg opened his first restaurant in 1948 as 'Open Kettle', in Quincy, Massachusetts. The name changed to 'Kettle Donuts' in 1949, and the now corporate name 'Dunkin' Donuts' was adopted in 1950. Rosenberg conceived of the idea for the chain after his experiences selling food in factories and at construction sites, where doughnuts and coffee were the two most popular items. Rosenberg sold franchises of Dunkin' Donuts to others as early as 1955.

In 1963, Rosenberg’s son Robert assumed leadership of the company at the age of 25, shortly after graduating from Harvard Business School. Robert stewarded the Company for the next 35 years. During that period, he and a management team of existing executives, franchise owners, and a few college friends began to change the business in fundamental ways.

In 1963, Dunkin’ Donuts opened its 100th location, but the brand was not yet the household name that it is today. The company was known as ‘Universal Food Systems’, a portfolio of 10 small food service businesses, including a vending machine company, industrial catering trucks, a cafeteria division, a delicatessen, a few pancake houses, a 15 cent hamburger chain called ‘Howdy Beef N’ Burger’ and most importantly, a number of Dunkin' Donuts shops.

In 1968, Dunkin’ Donuts went “public”, when the company sold stock to the public for the first time. In the 1970s, created a unique buying program, which saved franchisees up to 2–3% of sales which the franchisees then invested in a National Advertising Program, which achieved national attention for the brand.

In the 1980s, they changed the delivery service system by moving away from a 20 stool question mark counter and coffee sold in porcelain cups to a self-service system and beverages sold in paper cups. They also changed the concept by expanding beyond the four walls of the shop, to bring products through satellite locations to customers wherever they worked, shopped, traveled or played. They introduced territorial areas for franchise owners to open multiple locations and support small bakery commissaries rather than produce product in each individual store.

In 1990, navigated through a hostile takeover attempt by Knightsbridge Capital, a Canadian financial group, to find a friendly buyer in the United Kingdom, Allied Lyons, a spirits and food company. Among its holdings, Allied had owned Baskin Robbins in the United States since the 1970s. Under Allied, Dunkin' Donuts and Baskin merged operations. In 1995, the brand was revitalized by shifting the focus from doughnuts to coffee.

In 2004, the company's headquarters were relocated to Canton. The following year, four-time James Beard Foundation Award nominee Stan Frankenthaler was appointed the company's debut Executive Chef/Director of Culinary Development. In 2006, Dunkin' Donuts began using the slogan "America Runs on Dunkin'" which continues to be used in many advertisement campaigns.

Baskin-Robbins was founded in 1945 in Glendale, Calif., by two ice cream enthusiasts -- Burton Baskin and Irvine Robbins -- whose passion led to the creation of more than 1,300 ice cream flavors and a wide variety of delicious treats. Introduced its famed "31 Flavors" concept based on a different flavor for each day of the month in 1953.