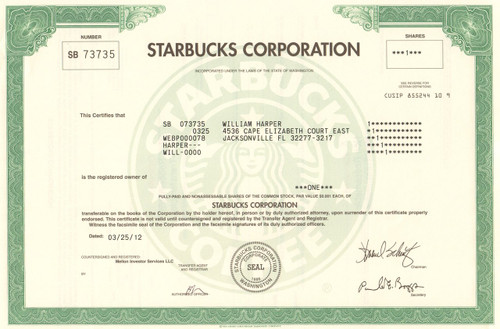 Fun coffee shop collectible. Great under print of the company logo.  Issued and not cancelled. Dated 2012.

The first Starbucks opened in Seattle, Washington, on March 30, 1971, by three partners who met while they were students at the University of San Francisco: English teacher Jerry Baldwin, history teacher Zev Siegl, and writer Gordon Bowker. The three were inspired to sell high-quality coffee beans and equipment by coffee roasting entrepreneur Alfred Peet after he taught them his style of roasting beans. The company took the name of the chief mate in the book Moby-Dick: Starbuck, after considering "Cargo House" and "Pequod".

The first Starbucks store was located at 2000 Western Avenue from 1971–1976. This cafe was later moved to 1912 Pike Place Market; never to be relocated again. During this time, the company only sold roasted whole coffee beans and did not yet brew coffee to sell. The only brewed coffee served in the store were free samples. During their first year of operation, they purchased green coffee beans from Peet's, then began buying directly from growers.

In 1984, the original owners of Starbucks, led by Jerry Baldwin, purchased Peet's. During the 1980s, total sales of coffee in the US were falling, but sales of specialty coffee increased, forming 10% of the market in 1989, compared with 3% in 1983. By 1986 the company operated six stores in Seattle and had only just begun to sell espresso coffee. In 1987, the original owners sold the Starbucks chain to former employee Howard Schultz, who rebranded his Il Giornale coffee outlets as Starbucks and quickly began to expand.

At the time of its initial public offering (IPO) on the stock market in June 1992, Starbucks had 140 outlets, with a revenue of US$73.5 million. The company's market value was US$271 million by this time. The 12% portion of the company that was sold raised around US$25 million for the company, which facilitated a doubling of the number of stores over the next two years.By September 1992, Starbucks' share price had risen by 70% to over 100 times the earnings per share of the previous year.