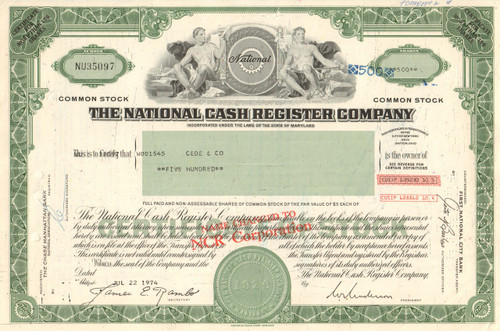 The company began as the National Manufacturing Company of Dayton, Ohio, which was established to manufacture and sell the first mechanical cash register, invented in 1879 by James Ritty. In 1884, the company and patents were bought by John Henry Patterson and his brother Frank Jefferson Patterson and the firm was renamed the National Cash Register Company.

NCR expanded quickly and became multi-national in 1888. Between 1893 and 1906 it acquired a number of smaller cash register companies. By 1911, it had sold one million machines and grown to almost 6,000 employees. Combined with rigorous legal attacks, Patterson's methods enabled the company to fight off, bankrupt or buy-out over 80 of its early competitors and achieve control of 95% of the U.S. market.

Two million units were sold by 1922, the year John Patterson died. In 1925 the company went public with an issue of $55 million in stock, at that time the largest public offering in United States history. During World War I the company manufactured shell fuses and aircraft instrumentation, and during World War II built aero-engines, bomb sights and code-breaking machines, including the American bombe designed by Joseph Desch.

In the 1980s, NCR sold various PC compatible AT-class computers. They proposed a customized version of MS-DOS named NCR-DOS, which for example offered support for switching the CPU between 6, 8 or 10 MHz speeds. In 1990, NCR introduced the System 3000, a seven-level family of computers based on Intel's 386 and 486 CPUs.

It was acquired by AT&T in 1991. A restructuring of AT&T in 1996 led to NCR's re-establishment 1997 as a separate company, and involved the spin-off of Lucent Technologies from AT&T. NCR is the only AT&T spin-off company that has retained its original name.